Rain is back in a big way.

Water falling from the sky is back in fashion, with Friday night's Blood Moon being among the big casualties as it thundered down last night.

One thing that has really resonated in the past 24 hours has been that distinctive rain smell.

That glorious, musty aroma that hangs around in the air after the heavens have opened.

Did you know it actually has a name? It is called 'petrichor'.

Word of the evening: petrichor - the unique smell of rain falling on scorched earth, after a long spell of hot weather.

And it is actually caused by a chemical being released from dead soil.

The smell of the air after a storm is caused by Geosmin: A chemical released by dead soil bacteria.

Humans are hyper sensitive to it, capable of detecting at a concentration of 5 parts per trillion.

It's theorised in our evolutionary past this helped us seek out water.☔️⛈️

Love that smell after rain in the summer? ☔️ Well, it actually has a name- it’s scent called petrichor. The last sentence may explain why we like it so much! I took these extracts from Wikipedia: https://t.co/QNieDIyf8Z #RAIN2018 #petrichor #rain pic.twitter.com/INccKWzmqF 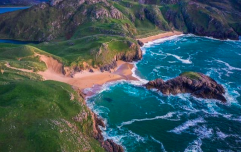 END_OF_DOCUMENT_TOKEN_TO_BE_REPLACED

Isn't that interesting? Now, go and bore people with that information next time someone mentions it.

In the meantime, be advised that a national status yellow rainfall warning is in effect until Wednesday.

Met Éireann notes that soil moisture deficits will remain in excess of 70mm in many parts of Leinster and Munster.

popular
Vogue Williams slams man who refused to swap seats with her on plane
This is why the world is obsessing over Adidas Gazelles
Are we getting a mini heatwave in September?
Phoebe Bridgers and Paul Mescal go sale agreed on West Cork home
Ryanair, easyJet and BA issue warning to anyone boarding with smart bag
Scarlett Moffatt slams 'disgusting' pap for sneaking into hotel to take photos of her
Green Party representative calls for a temporary ban of stag and hen parties in Ireland
You may also like
16 hours ago
Are we getting a mini heatwave in September?
2 days ago
Status Orange thunderstorm warning issued for 14 counties
4 days ago
Met Éireann extends high temperature warning for Ireland this weekend
1 week ago
Weather advisory issued as temperatures in Ireland set to soar again
2 weeks ago
Heavy rain persists as summer weather comes to an end
4 weeks ago
Europe's heatwave to last until next week, experts say
Next Page