It was a sad day.

Earlier this year, many were delighted to find a Stormzy mural painted in Smithfield.

It was just days before the star arrived in Dublin and to say it was a masterpiece is an understatement. 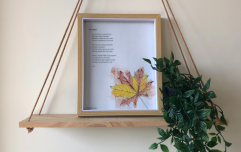 END_OF_DOCUMENT_TOKEN_TO_BE_REPLACED

However, it is no more.

Dublin City Council confirmed that because there was no planning permission or application for its retention, the mural could not remain.

Instead, there is now a 'Grey Wall'.

An ironic plaque on the wall now reads: “Grey Wall is standout piece in Dublin City Council’s continuing series on the transience and meaninglessness of art. Irish art: 4 places to get the perfect prints for your home

END_OF_DOCUMENT_TOKEN_TO_BE_REPLACED

“The drab, lifeless scene drains the colour from its surroundings, giving a stark warning about the threat of bureaucracy to imagination.”

It continues: "A powerful statement to Smithfield's growing creative community about the fragility of art."

An art collective group called Subset created the Stormzy mural and said they couldn't afford to apply for planning permission.

“We’re a startup. We have very little money and in order for us to apply for planning permission… it would have been very costly and time-consuming," they told The Journal.

Here's to another grey wall...

Girls With Goals || Her · Ep.151: 'A Story Shared' - Aoife P. Rafter on blogging during a pandemic and living with CF
popular
Around the world: The most popular baby names in major cities across the globe
When will lockdown end in Ireland?
Netflix announces new true crime documentary series: The Vanishing At The Cecil Hotel
"The female gaze is brilliant:" Why Phoebe Dynevor is proud of Bridgerton's sex scenes
Matt LeBlanc And Matthew Perry Reveal Reason Why They Didn’t Attend Jennifer Aniston’s Wedding
Not petite or plus size? 4 'mid-size' style influencers you should follow on TikTok
Kate Middleton has addressed the rumours that she's pregnant with her fourth child
You may also like
6 months ago
DIG IN, the world's first 'Art Diner' has just opened on Dublin's Camden Street and it looks fab
7 months ago
There's a new focaccia bread-art trend going around and it's completely stunning
9 months ago
Living with synesthesia: The Irish artist who experiences colour in an entirely different way
10 months ago
Colour and chaos: Assembling Atelier Maser's latest contemporary art offering
1 year ago
Irish artists' poignant work at auction for Dublin Rape Crisis Centre
1 year ago
Vanessa Power's experimental Signs of Power art show debuts this Thursday
Next Page