Over 650 marches are talking place worldwide against Trump's presidency.

Hundreds of people marched in Dublin and Galway today in Solidarity to women who now have Donald Trump as the leader of their country.

Donald Trump's inauguration took place yesterday which means he is officially president of the United States. 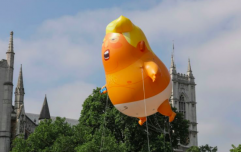 END_OF_DOCUMENT_TOKEN_TO_BE_REPLACED

Women of the United States, as well as various minorities fear what their rights will be while he is in power.

This is why women all over the world are marching for their rights.

Dublin and Galway were among hundreds of other locations which held marches.

Organisations such as Union of Students in Ireland, the Abortion Rights Campaign and the National Women’s Council of Ireland were all present.

The march began at around 12.30 in the City Centre and continued through O'Connell Street.

People on Twitter have been sharing photos and videos of the Irish marches.

We stand with Women. With Refugees. With Migrants. With People of Colour. We stand for Humanity. And we stand against hate. #WomensMarchIre pic.twitter.com/lltMADuVWH

How incredible it is to see so many people taking part in #WomensMarch all over the world! This is #WomensMarchDublin :-) pic.twitter.com/jcePVO1WDi