In need of your feel good story of the day?

You may just have found it.

(Just ignore all of the horrible aspects at the beginning of it and you'll be doing just fine.)

A dog named Leialoha who was buried in the sand and left to die has wagged her tail for the first time since being rescued.

The puppy had been buried on a beach in Honolulu, Hawaii by a man wielding a machete at the beginning of the month, July 9.

Animal rescue group, PAWS of Hawaii, managed to dig up the puppy and take her to safety. She was badly sunburnt, swollen, and missing 90 percent of her fur.

"This beautiful girl was found by one of our team members," they wrote on Facebook. "Someone had just buried her and they had a machete so who knows what was next."

Soon afterwards, Leialoha was taken in by a foster family. She began her recovery, but was still suffering from severe dehydration and sores all over her skin.

PAWS wrote that when Leialoha had her first bath, she was "bleeding from every inch of her body." 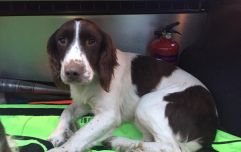 END_OF_DOCUMENT_TOKEN_TO_BE_REPLACED

"Her foster ohana (family) are the kindest people and we are so happy she is safe with them while she heals up," they said.

"Mahalo Foster mom Amanda and ohana, you are all so appreciated. After her bath she went for a little news interview. What a star."

Today, PAWS shared an update detailing that the puppy had wagged her tail for the first time since she was rescued.

They said that although Leialoha was still struggling, the worst was over.

"Litte Leialoha is still a bit hesitant and shy, given all she’s gone through. But the improvements are consistent and just breathtaking," they said.

"She wagged her tail and is coming out of her shell more each and every day!"

"This beautiful baby is in a wonderful foster home," they said.

"She has received adoption inquiries from all around the world. What a blessing to see that so many people love and care for this precious girl. We are truly glad that she was saved in time."

popular
Rupert Young, twin brother of Will Young, passes away, aged 41
The second season of Dirty John lands on Netflix next week and we’re already hooked
WATCH: Paul Mescal stars in new Rolling Stones' music video 'Scarlet'
Staycation: TripAdvisor reveals the top 10 hotels in Ireland for 2020
Someone has ranked the penis size of men from all over the world
Daisy Coleman from Netflix's Audrie & Daisy has died, aged 23
Kate Middleton has addressed the rumours that she's pregnant with her fourth child
You may also like
1 day ago
Daisy Coleman from Netflix's Audrie & Daisy has died, aged 23
2 days ago
Concerns over extradition of Madeleine McCann suspect Christian B
3 days ago
11 new Emperor penguin colonies discovered in Antartica
1 week ago
Bewley's is set to open its doors... again!
1 week ago
Staycation scams: Warning issued for home holiday makers this summer
1 week ago
104 Pandemic Unemployment Payments cut following airport checks
Next Page