A couple of days before the general election and we have to hand it to Donegal independent candidate Tim Jackson.

Tim, who hails from Ballybofey in Donegal, said he will go on a date with Kirsty Buchanan on the condition that his Facebook page reaches 4,000 likes.

Kirsty got in touch with us to share her Facebook exchange with Tim and it's receiving considerable attention on the social media site too. 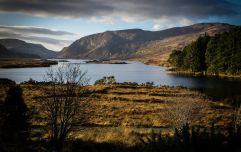 END_OF_DOCUMENT_TOKEN_TO_BE_REPLACED

After noticing Tim's face 'on numerous occasions' while driving on local roads, Kirsty said that his good looks deserved a number one vote.

Tim (and his campaign manager) then decided that this was the perfect opportunity to heighten their social media presence.

The page currently stands at 2,746 likes so we think this date has a good chance of going ahead...

Cheers to Kirsty, Jalna Breslin and Daniel McGill for sending this our way. If you have something you'd like to share with us, get us on Twitter here, on Facebook here or you can drop a line to hello@her.ie.

popular
Wagatha Christie: Rebekah Vardy storms out of court just 30 minutes into final day
Fashion house Dolce & Gabbana is 'sponsoring' Kourtney and Travis' Italian wedding
'She was always in awe of celebrity' – Rebekah Vardy's ex-husband speaks out
Claire Byrne Live viewers in shock as woman shares family DNA secret
Rebel Wilson claims male co-star sexually harrassed her
Get Out has officially dropped on Netflix and we know what we're watching tonight
This is the easiest way to determine you may have VIKING heritage
You may also like
1 week ago
Teenage girl dies in hospital after Bank Holiday crash
1 month ago
Man in his 20s dies after Donegal collision
1 month ago
Man arrested after body of woman found in house fire in Donegal
1 month ago
Yellow wind warning issued for four counties today
1 month ago
Young woman injured in St. Patrick's Day attack in Donegal
3 months ago
Hundreds invited to be in Liam Neeson's new film in Donegal
Next Page