Dynamo looks unrecognisable as he receives treatment for Crohns disease

Dynamo took to Instagram last night to share an image of his swollen face post-treatment as he battles Crohns disease.

The TV personality and magician tried to make light of the situation by humorously captioning the image "#NoFilter", as he posted the effects of the disease, which he has been battling since he was a teenager.

Dynamo has spoken out about Crohns disease various times and admitted that he would never leave the disease affect his career despite the pain he often feels.

The 34-year-old told BT that the level of pain varies for everyone but revealed that for him he still wakes up in pain everyday and continued by saying:

"The first hour of my day is taken up, I’m usually on the toilet for a long time in pain, stomach cramps, sometimes internal bleeding. I have different things that I do, like heat treatments and certain meditations to get myself in a comfortable position to feel ready to get dressed and face the world. And it is very restricting on diet." 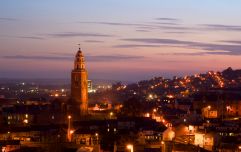 END_OF_DOCUMENT_TOKEN_TO_BE_REPLACED

He also admitted that the preparation for the day doesn't end there, if he is out for the entire day, the star must bring meals in plastic containers for fear of eating something that doesn't agree with him elsewhere. Dynamo admitted that he once spent two weeks in hospital after eating popcorn and vows to not leave that happen again.

Fans were quick to comment their support and love underneath the image shared late last night and we send our love to Dynamo to get well soon.

popular
10 Dublin restaurants with outdoor areas we'll be hitting up for the next 3 weeks
WATCH: Netflix to release documentary on the Watts family murder
Someone has ranked the penis size of men from all over the world
Scientists discover potential “game changer” that “could help eliminate Covid-19”
A gynaecologist has given the tampon its first notable redesign in 80 years
New documentary sheds light on hidden sexual violence of the Irish revolution
Gardai investigating "all circumstances" as young woman is found dead in Dublin apartment
You may also like
15 hours ago
Jackie Stallone: Celebrity Big Brother star and Sly's mother dies aged 98
1 day ago
"I was petrified and wanted a hand to hold:" Irish women call for the ease of maternity restrictions
1 day ago
Micheál Martin says "more influencers" needed to reach young people about Covid dangers
4 days ago
"Many will be upset..." Dublin to move to Level 3 from midnight, Taoiseach confirms
4 days ago
It'll take Ireland 55 years to bridge the gender pay gap
4 days ago
Netflix's Cheer star Jerry Harris arrested on child sex images charge
Next Page