The Parisian model often shares snaps of her daily life on Instagram but it turns out there's actually a message behind the seemingly innocuous snaps.

However, if you look closely and you might only notice this when it's pointed out, each snap on the account shows Louise posing with an alcoholic beverage.

END_OF_DOCUMENT_TOKEN_TO_BE_REPLACED

This Instagram account set up on August 1st, is actually fake and is the work of Addict Aide, an organisation established to help people concerned about alcohol addiction, either their own or someone else's.

The campaign, entitled Like My Addiction, was put into practice in a bid to show that the signs of alcohol addiction can go unnoticed.

It has been successful too for in the hours after the truth was revealed, Addict Aide received five times more traffic to its site that the usual figures. 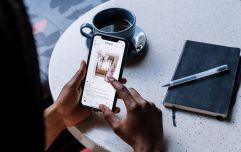 END_OF_DOCUMENT_TOKEN_TO_BE_REPLACED

The below video gives a backstory to the campaign and Louise's large following, 56.5k to be exact, expressed shock at the real reason for the fictional Instagram posts.

The campaign was conducted by Paris agency BETC with their creative director Stéphane Xiberras Paris explaining the approach to Ad Freak:

"We were briefed on the difficulty of detecting the addiction of someone close to you—a friend, a child or a parent.

"We thought an interesting way of showing it would be to create a person people would meet every day but whom we'd never suspect of being an addict, by setting up a fake Instagram account."

It's important to note that posing for photos while drinking alcohol does not indicate that someone could be suffering from alcohol addiction but the campaign is an interesting one all the same.

If you want to get information on alcohol addiction, you can get in touch with Alcohol Action Ireland on 01-8780610 or visit the website here.

popular
Police release bodycam footage of missing YouTuber Gabby Petito
Terrie McEvoy responds to trolls who commented on her pregnancy weight
Someone has ranked the penis size of men from all over the world
Ariana Grande just dropped a breakup song about Pete Davidson AND Mac Miller
Derry Girls star speaks out after show called "distinctively British"
Forget Making a Murderer, This Crime Documentary is Finally on Netflix
The 'secret' Zara label signs that'll apparently help you get the right size every time
You may also like
2 days ago
Why did Britney delete her Instagram?
2 weeks ago
Vicky Phelan vows to never miss another child's birthday again
1 month ago
Marissa Carter's name is off Cocoa Brown products - but she's not giving up so easily
1 month ago
There's an Instagram page that shows you exactly where to buy the Love Island clothes
1 month ago
Love Island's Millie and Liam may have bumped into each other long before the show
1 month ago
Love Island's Danny Bibby speaks out about racism scandal
Next Page