Feeling The Fear? Scientists Are On To A New Hangover Cure...

It's Monday morning, pouring rain and if you went a bit mad at the weekend, chances are you're still feeling a little under the weather.

However, instead of rehydrating yourself with water, one researcher believes that drinking more alcohol the morning after a night out is the way forward.

Award-winning science journalist, Adam Rogers, believes drinking alcohol the morning after the night before is the best way to get over a hangover. 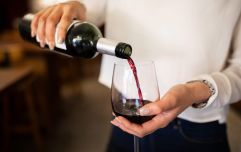 END_OF_DOCUMENT_TOKEN_TO_BE_REPLACED

Speaking at a Google talk earlier this year, Adam, the brains behind Proof: The Science of Booze, said “There is a theory that says the hangover is actually the symptom of very, very small amounts of methanol”, he said.

“The notion is if a hangover is methanol toxicity, you’re going to have another drink and the ethanol displaces the methanol off the enzyme and you will feel better. That’s the hypothesis, no one has proved that".

However according to Metro.co.uk, Lauren Owen from the Alcohol Hangover Research Group, believes Mr Rogers may have a point, saying "alcohol acts on a number of chemicals in the brain to increase feelings of pleasure. Reduction of hangover symptoms by “hair of the dog” may also be due to the activity of alcohol on neurotransmitter systems".

Interesting but we're not quite sure it's the way forward!

Girls With Goals || Her · Ep.160: The Beauty Of Coaching - Hayley Harrison joins us from Sport Ireland
popular
Penneys shopping by appointment booking portal is now live
ASOS is selling moob tubes and we all know someone who'd wear one
First Dates Ireland's Mateo Saina welcomes baby boy with partner Vjerana
"Irresponsible" Max Mara advert banned over "gaunt" model
More footage of Tristan Thompson cheating on Khloe has emerged
Sexual Experience Survey results: Over half of Irish women believe orgasmic sex is one of the top three greatest pleasures in life
Man discovers 'fake cupboard' in kitchen is actually a dishwasher
You may also like
3 months ago
New regulations on the sale of alcohol in Ireland in effect from today
4 months ago
Cheers! 3 delicious ways to pimp your Prosecco for Christmas
6 months ago
Guinness announces launch of Guinness 0.0, “the Guinness with everything, except alcohol”
7 months ago
Lockdown life: Hands up who's lately been drinking more alcohol
1 year ago
How to get out of the wine o'clock habit at home: A sober coach shares her expert tips
1 year ago
Drinking vodka and Red Bull on a night out can lead to 'risky behaviour', says study
Next Page