Frozen: The Musical is coming to London's West End (and tickets go on sale this week)

Disney's Frozen: The Musical is coming to London's West End - and tickets go on sale this week.

The snow-stopping musical is set to debut in London in October 2020. But if you want to get your hands on some tickets, we've got some good news: tickets go on sale on Friday.

Previews will be running at the Theatre Royal Drury Lane, according to Yahoo. The theatre will be reopening as The Lane, with previews set to go from October 30 until November 10.

As of November 12, performances will run at 7pm every Wednesday to Saturday, and at 2.30pm on Thursday and Saturday. There will also be performances at 1pm and 5.30pm on Sundays.

And while presale for the show happened in January, the rest of the tickets will be going on sale on March 6. 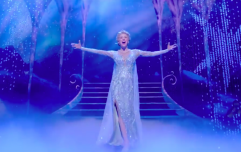 END_OF_DOCUMENT_TOKEN_TO_BE_REPLACED

The musical show pretty much tells the same story as the 2013 animated film with the same name. However, there are a few differences between the two.

For one, it's a bit more darker and grown-up than the film was - and there's some new songs, too (although. she does still sing Let It Go, don't worry).

Also, Kristoff's adoptive family of trolls isn't included in the show - and there's a lot more of a backstory provided for some of the characters.

You can find out more information about the show here.

popular
Only a matter of time before monkeypox spreads to Ireland, says expert
Wagatha Christie: Rebekah Vardy storms out of court just 30 minutes into final day
Denis Sulta had a cameo in Derry Girls alongside his girlfriend Saoirse-Monica Jackson
Vicky Phelan enjoys "pure bliss" solo trip to Doonbeg
Sainsbury's evacuated after several people fall ill with breathing problems
Claire Byrne Live viewers in shock as woman shares family DNA secret
Conversations with Friends praised for showing reality of endometriosis
You may also like
2 months ago
Ukrainian girl who sang Let It Go in shelter escapes to Poland
6 months ago
Frozen star addresses possibility of third movie
1 year ago
QUIZ: How well do you remember the movie Frozen?
2 years ago
Josh Gad, aka Frozen's Olaf, is reading nightly bedtime stories for kids in isolation
2 years ago
Viewers praise Sophia's powerful anti-bullying message on the Late Late Toy Show
2 years ago
Everyone is saying the same thing about the opening number of tonight's Late Late Toy Show
Next Page