Although people often lament the death of romance and chivalry and other seemingly old-fashioned concepts, it seems for some couples, special gestures are more important than ever.

Twitter user Zara took to the social media site to share an adorable video of a gift made by her boyfriend Jasper, so that she would have something special to remind her of him while he's away in college.

boyfriend made this for me before he goes away to college (': ? pic.twitter.com/pL8FwnEJIG

Zara has described it as an 'Explosion Box' and it's full of special photos and videos that mean something to the couple. Like, can you actually deal?!

@future_nurse19 it's called an explosion box! There should be tutorials online! 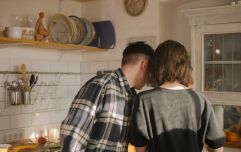 END_OF_DOCUMENT_TOKEN_TO_BE_REPLACED

The video shows how much effort and time and thought went into putting the present together and honestly, it's just so thoughtful.

Unsurprisingly, the video has received a HUGE reaction with almost 7,000 retweets and bordering on 13,000 favourites.

People had loads to say too about how fab the idea was, writing comments about how it was so sweet.

@snikda_araz This is probably the sweetest thing I've ever saw!

Another tweet, which is just too much altogether, said:

"thanks for reminding me of my impending loneliness once again".

@chelabellaaaa @snikda_araz ???????? thanks for reminding me of my impending loneliness once again

According to METRO, Jasper and Zara have been together for about a year and the special box focuses on photos of some of their stand-out memories during the 12 months they've been going out.

@snikda_araz @candicenicolexo I would literally cry for like a month straight if I ever got something like this ??

popular
Kim Kardashian addresses Balenciaga's disturbing campaign
Shawn Mendes (24) is reportedly dating Dr Jocelyne Miranda (50)
Nicola Coughlan is raffling her Bridgerton bag for LauraLynn
Jill Scott makes history with I'm A Celeb victory
US fast food chain Wendy's planning to open in Ireland
3 simple tips to get your nails in shape ahead of Christmas
Lindt releases a new hot chocolate just in time for Christmas
You may also like
2 months ago
Irish woman who flew 7,000 miles for a Tinder date now has a baby with match
4 months ago
Love Island producers to launch middle-aged spin-off for Mums and Dads looking for romance
10 months ago
Una Healy "having fun" dating Garda love interest
1 year ago
Kim Kardashian "likes" Pete Davidson, apparently
1 year ago
Love Island's Lucinda is officially back with Irish footballer Aaron Connolly
1 year ago
Sharon's head is turning back to Hugo in tonight's Love Island
Next Page