Can you see this catching on?

Kieran Lumsden had planned a holiday to Magaluf with a group of lad friends and to ensure he didn't get up to anything untoward, his girlfriend Whitney decided to put together a list of 'rules'.

Whitney Travers decided that the mini rulebook was a necessary accompaniment for Kieran's holiday and she put a lot of effort into making it, complete with bright markers, glitter and a couple of palm trees thrown in for good measure. 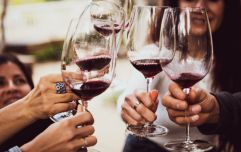 You can actually get paid to drink wine on holiday

END_OF_DOCUMENT_TOKEN_TO_BE_REPLACED You can now stay in a Barbie inspired caravan

END_OF_DOCUMENT_TOKEN_TO_BE_REPLACED

Whitney doesn't go into detail about who Kim is but I'm going to have a guess that Kim is Kieran's mother and Whitney wants him to keep in daily contact with her.

Of course, the tweet received a HUGE reaction on Twitter and has gone massively viral with 7,000+ retweets and 14,000+ favourites.

popular
Kim Kardashian addresses Balenciaga's disturbing campaign
Shawn Mendes (24) is reportedly dating Dr Jocelyne Miranda (50)
Nicola Coughlan is raffling her Bridgerton bag for LauraLynn
Jill Scott makes history with I'm A Celeb victory
US fast food chain Wendy's planning to open in Ireland
3 simple tips to get your nails in shape ahead of Christmas
Lindt releases a new hot chocolate just in time for Christmas
You may also like
4 months ago
Vicky Phelan gives update after holiday with her close friends
5 months ago
Double-decker aeroplane seats could become a thing soon, unfortunately
6 months ago
The world's biggest cruise ship is coming to Europe this summer - here's what to expect
9 months ago
The Too Hot To Handle Villa is now the most expensive place to stay on Airbnb
9 months ago
A new luxury beach resort is coming to Co. Laois
1 year ago
You can now rent out the Kardashian's Tahoe villa retreat
Next Page