Guy sends girl a text meant for group of friends

Texting is a useful means of communication but it can go horrifically wrong, whether it's an embarrassing autocorrect or a message sent to the wrong person.

The latter is what happened to Dan O'Hara when he sent a message meant for his group of friends to the girl he had just met.

Dan had just met a girl called Laura and accidentally replied to her when he was meant to be texting his friends.

To make it worse, he wasn't exactly complimentary about her.

Screenshotted a girls convo and accidentally sent it back to her instead of the group chat ?? pic.twitter.com/oAPxYZ8xxR

My life's one big joke. I love it

It wasn't even that funny. I broke the poor girls heart. Your all heartless bastards 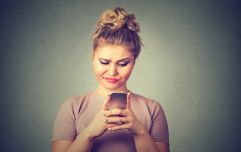 END_OF_DOCUMENT_TOKEN_TO_BE_REPLACED

Dan then posted a screen grab of said message thread to Twitter with the caption: "screenshotted a girls convo and accidentally sent it back to her instead of the group chat".

The tweet went viral and provoked a huge reaction with people commenting on and replying to the original treat.

He even ended up chatted to This Morning to talk about it - somehow we doubt Laura is impressed.

Big up Phil and Holly for the shoutout on this morning ?