Here's what the guy who played Barney really looks like

"Barney was beautiful. Barney was very, very good to me."

It's the throwback to end all throwbacks.

All nineties kids will remember sitting down to watch Barney the Dinosaur after school back in the day, but did you ever wonder what he really looked like?

Well, our purple friend has been unmasked and you'll be very surprised at what he really looks like. 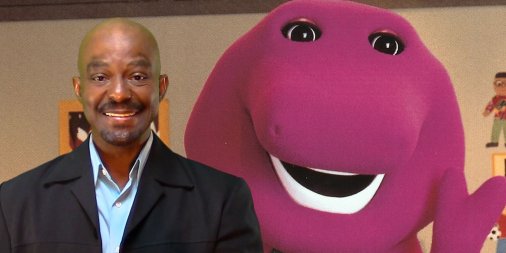 END_OF_DOCUMENT_TOKEN_TO_BE_REPLACED

David Joyner played the character from 1991 to 2001, but came to the role in a roundabout way, he told Business Insider.

He originally worked as a software analyst, but always harboured dreams of being on TV.

Now you might think David would resent his career being built around a slightly cringey kid's character, but that's not the case at all - he's VERY enthusiastic about having been Barney and actually loves the I Love You song.

"Now a lot of times you hear those words, and some people like, "Oh my god, that song," and I'm like, "No, no, no" listen to it. I love you, you love me. We're a happy family. So now, we're now gathered together in this beautiful harmonious thing that’s happening. So it's a beautiful thing to know how that song has impacted pretty much this next generation."

Just watch this for yourself.

This man played Barney the dinosaur for 10 years — here's what it was like pic.twitter.com/RbdrQ5UxBD

popular
16 and Pregnant star Jordan Cashmyer dies aged 26
Gardaí seize two cars linked to Ashling Murphy death as they question new suspect
Woman dies following Co. Meath house fire
Here's where all the 149 tickets that won €36,687 in Saturday's Lotto were sold
A celebrity hairstylist just shared a genius hack for the perfect messy bun
Dancing on Ice professional Sean Rice dies at 49
Giant asteroid "bigger than any building" to pass Earth on Tuesday
You may also like
2 days ago
Here is everything we know about the Desperate Housewives reboot
3 days ago
Cheer season 2 further highlights the vulnerability of its young stars
6 days ago
Desperate Housewives could be coming back - but what could we expect from a reboot?
2 weeks ago
10 of the best on-screen fashion moments from 2021
2 weeks ago
And Just Like That... episode 5: What's next for Miranda and Che?
3 weeks ago
And Just Like That... episode 4: New friendships are formed and others are lost
Next Page