A 21-year-old Belfast woman was this week handed a suspended sentence for buying and using miscarriage-inducing drugs on the internet.

The woman, who was nineteen when the incident occurred, was reported to Northern Irish police by her housemates.

The two women who found the male foetus in a plastic bag, have been subject to heavy criticism since the sentence was served, so much so that they have both received counselling. 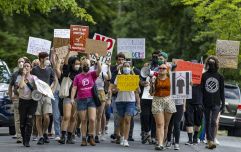 What is next for abortion laws in the US and could other rights be stripped away?

END_OF_DOCUMENT_TOKEN_TO_BE_REPLACED

Now, they have spoken out about their decision to report their housemate, saying that the woman had referred to the foetus as a "pest".

Speaking to The Belfast Telegraph, they said:

"She called the baby 'the pest' and kept saying she just wanted rid of it. I offered a number of times to become legal guardian to the child. I myself had just had a miscarriage.''

"This isn't anything to do with the rights and wrongs of abortion. I'm not anti-abortion. I believe there are circumstances, like rape, where it should be a woman's choice. This was about her attitude. It was as if she was getting rid of a piece of clothing."

"We tried to help her. She was given lots of different options. We even tried to talk to her family to get them to help her, but we didn't know them and she wouldn't give us their contact details. People are saying we contacted police out of malice. That's not true.''

"I tried to be nice to her. My mum took her own life when I was 17 and I knew how badly that affected me, so I thought that something that bad must have affected her.''

"I asked her why she wouldn't give the baby a proper burial and she said 'do you want me to put it in a bag and throw it up the street?' I was so angry at her attitude. I eventually cracked up and told a friend. I was a frantic mess. He was shocked and told me I had to contact the police".