INFOGRAPHIC: Want To Know The Secret To The Perfect Night's Sleep?

Sleeping is one of our favourite things to do but many of us have trouble doing it, which is why the folk over at Best Infographics decided to put the perfect sleeping positions for different ailments.

The most common sleeping position is on the side, which is where 57% of people begin their night’s sleep, with 17% opt for lying on their back and 11% on their stomach. Men typically sleep with two pillows on their bed while women opt for four.

According the The Wall Street Journal, who published the graphic, experts say there is no one right way to sleep, however for people who battle with certain pain and medical conditions, there are ways to rest at night that can help alleviate various problems.

If you’re suffering from acid reflux or indigestion it is advised that you elevate your head with pillows or place bricks under the front legs of your bed.

For those who battle with obstructive sleep apnea/snoring it is suggested that you sleep on your side to avoid the collapse of the tongue and tissues in the throat, which impairs breathing.

Take a look at the infographic in full below that covers the full list of sleeping positions that can help with a number of annoyances, aches and pains. 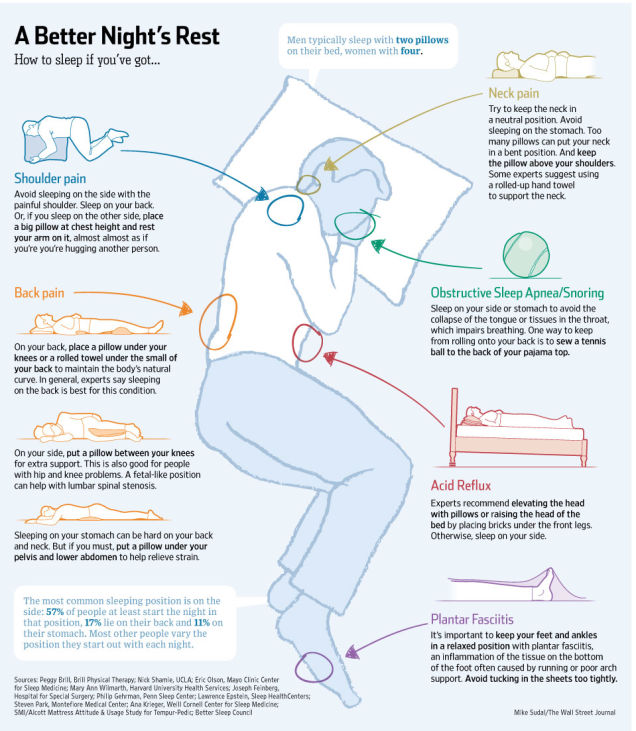 popular
10 Dublin restaurants with outdoor areas we'll be hitting up for the next 3 weeks
Tried and tested: 3 sheet masks that seriously impressed me
WATCH: Simone Biles just did a triple backflip, a move not even recognised in women's gymnastics
The Christmas movies TV channel is launching this week
WATCH: Netflix to release documentary on the Watts family murder
New documentary sheds light on hidden sexual violence of the Irish revolution
Netflix shares trailer for fascinating David Attenborough documentary
You may also like
2 months ago
Mask up: 5 seriously stylish face masks to order now (because they will sell out)
1 year ago
Science says this is how you know if you should shower in the morning or night
1 year ago
A study has found whether running or walking is better for your health
1 year ago
This major pancreatic cancer breakthrough offers new hope for treatment
1 year ago
This bad habit makes you FOUR times more likely to catch a cold
1 year ago
Love a bit of gossip? It might not be as bad as you think
Next Page