"I love you, pretty lady, always have, always will."

A devastated Irish man has written an open letter in tribute to his wife, who tragically passed away just days after their wedding.

END_OF_DOCUMENT_TOKEN_TO_BE_REPLACED

Two days later, and less than three weeks after being diagnosed, the 29-year-old woman sadly lost her battle with cancer.

Heartbroken Noel recalled in an open letter posted to Facebook how they had moved their wedding ahead by seven months to "fulfil out wish" to get married.

"We always said we were a team, but now I’ve lost my captain.

"I’m writing this in your bedroom in Ardagh, surrounded by everything that encapsulates your life over the past 29 years. A room the essence of you.

"We’ve been through so much since we first met in Mary I on the very first day of college in 2006. We’ve been to so many places, done so many things, and achieved so much, it’s hard to know where to begin."

He went on to list some of the "little things" he would miss about his wife, including her "4 minute limit on boiling an egg", "obsession with silky labels" and "love of the snooze button".

But, as he admitted in the letter, he doesn't feel that her death has sunk in yet.

"I so badly want this to be a dream, but, in reality, it’s a real-life nightmare. People say there are no words. The truth of it is there are - unfair, undeserved, one hundred percent unnecessary.

"I’m not writing this letter for you to bemoan the cruelties of this world though, I’m writing to tell the world just how great you are.

"You hold my hopes, my dreams, my love. You’re one of a kind and I’m lucky to call you my wife."

He recalled a number of their adventures while traveling, from "sleeping under the stars in the Sahara Desert" to "walking along a plank on a cliffside 7,000 feet in the air in central China".

"We saw much of the world together in a unique way, and we had plans for so much more. Our Scratch Map now left unscratched."

Noel also opened up about the plans they had had for their future.

"The plans we had for the future - a house in a Naas, three kids - Keegan, Kelly and Casey - the name we knew people would question.

"They’d support Limerick in the hurling, Mayo in the football.

"Before any of that though, our planned wedding on August 3rd - for 2018 was meant to be the year we got married.

Following Kathy's diagnosis, the couple decided to move their wedding ahead by seven months so they could "fulfil their wish".

They wed on January 14 in a moment that Noel said "will never be forgotten". 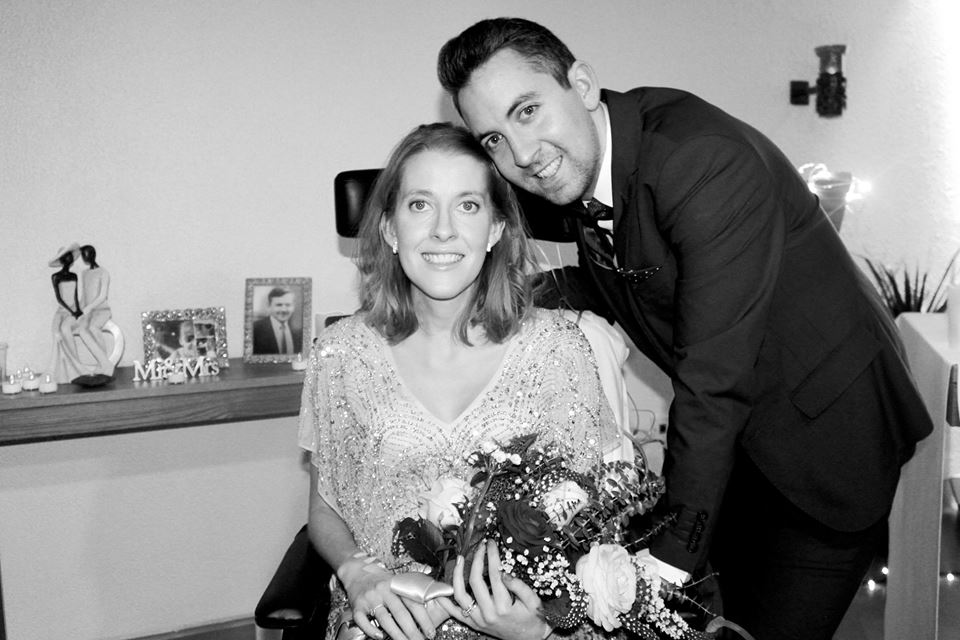 "Last Sunday, on the eve of our 11th anniversary and seven months ahead of time, we fulfilled our wish.

"We always wanted a wedding a little different, but neither of us could have imagined what unfolded.

"Last Saturday, from the moment we decided to kick off a chain of events that would go on to include high court judges and government ministers, you were beaming.

"As adrenaline and euphoria kicked in, the illness took a backseat and wedding planner Kathy kicked in - handing out orders left and right - like normal really.

"The smile on your face as you walked into the Oratory in the Mater Private in your Jenny Packham dress with your mink nail polish - your radiance, your beauty - it’s everything I’d hoped for and more.

"The love was never stronger, the joy palpable. It’s a moment that will never be forgotten.

"You held out long enough to get that walk down the aisle, the moment of 'I do', the matrimonial kiss."

Noel added that he hopes to try and embrace "even a fraction" of Kathy's strength as he tries to come to terms with the devastating loss.

"You leave behind a heartbroken family, devastated friends and soul crushed colleagues. You’d given so much and had so much more yet to give.

"While you’ve taken this final journey on your own, departing ahead of time, I know you’ll be waiting for me in Arrivals when my time too finally comes.

"While you wait, I know you’ll meet all those that have gone before. You’ll also finally get to meet my dad, and fill him in on the last 11 years. Tell him I said hi.

"You told me that when you were gone, I’d need to take on your strength, and it’s something that I hope I can do, if even a fraction.

"Your approach to tackling the past three weeks is testament to your character - your strength, bravery, determination, and positivity.

"You’re my travel companion, my jiving partner, my secret keeper, my best friend, my wife.

"I love you, pretty lady, always have, always will."