Irish Rail are searching for a owner of a rogue, lost dog who boarded a DART and accidentally ended up in Pearse station.

The little guy got on the DART somewhere along Dublin's southside earlier this morning, eventually departing the train at Pearse.

The dog, who will no doubt by named something totally adorable by the end of today, is currently being looked after by station staff.

This little customer boarded a DART on southside this morning and got off at Pearse, currently being looked after by station staff. Is it yours? #lostdog pic.twitter.com/vxJsYv2F55

"This little customer boarded a DART on southside this morning and got off at Pearse," Irish Rail wrote on Twitter this morning.

"(He is) currently being looked after by station staff. Is it yours?"

There is no sign yet of the dog's owner coming forward, but we can only hope that the little guy is picked up soon.

This comes a few months after a dog made headlines around the world after landing into Heuston station on his own.

.@IrishRail staff are still looking for the owner of Hamish - the intrepid hound who took the 0846 from Sallins, Co Kildare to Dublin Heuston this morning. Staff member Ted Maher, who also volunteers at an animal sanctuary, is giving him a home for the night. @PA pic.twitter.com/pewRlfPMNA 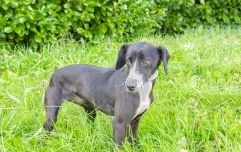 END_OF_DOCUMENT_TOKEN_TO_BE_REPLACED

The dog, whose real name was Tyson but had lovingly been called Hamish by staff, took the train all the way from Kildare to Dublin's Heuston station a few months back.

After an extensive social media campaign - and a slot on RTE News - he was eventually reunited with his owner.

Tyson was later chipped to ensure that if he ever wanders off again, he can be found.

Girls With Goals || Her · Ep.151: 'A Story Shared' - Aoife P. Rafter on blogging during a pandemic and living with CF
popular
Around the world: The most popular baby names in major cities across the globe
Matt LeBlanc And Matthew Perry Reveal Reason Why They Didn’t Attend Jennifer Aniston’s Wedding
Netflix announces new true crime documentary series: The Vanishing At The Cecil Hotel
Irish people are smoking more since start of pandemic, says study
Here's the average age people lose their virginity around the world
Someone has ranked the penis size of men from all over the world
Multiple concerts to be planned across EU to mark end of Covid this summer
You may also like
8 months ago
Chris Evans gave his dog a haircut and it didn't go well at all
8 months ago
Living in loungewear? You can now get matching sweats for you and your dog
11 months ago
Bad news klaxon! Kissing your pet on the mouth may be damaging your health
1 year ago
This is how you can get a puppuccino for your dog at any Starbucks cafe
1 year ago
Why being patient and allowing for sniffs means the world to your dog
1 year ago
Bella and Simba - These are the dog names most likely to trend in 2020
Next Page