There is no shortage of inspiration for pranking our poor parents on TikTok.

Earlier this summer, Irish TikTokers tested the extent of their mothers' nosiness with a viral challenge, but now it's the dads' turn. 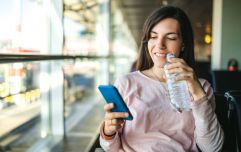 END_OF_DOCUMENT_TOKEN_TO_BE_REPLACED

The latest trend sees young adults call their dads - or send them voicenotes - explaining that they paid a hefty price for air in their tyres at the garage. The dads, it's safe to say, are less than impressed.

The set up of this prank is perfect. You get to hear the disbelief in the dads' voices. They generally need a few seconds to process what they've just heard, before responding appropriately. It also allows them to seamlessly make a classic dad joke - literally any rift on having air in one's head - while they're fuming.

In some instances, like in @eabhaodonoghue's TikTok, the dad's anger is directed towards the garage who had the audacity to charge a hefty fee for literal air.

In others, the dads are pure raging at their offspring for being foolish enough to pay the price.

Karl Dempsey's dad responded to the prank by sending his son voice notes warning him against doing anything to the car without him present. Moreover, when his son explained that he paid €75 for premium air, his dad told told him he had "premium air between [his] f***ing ears".

So, how would your dad react if you told him you paid top dollar for premium air for your tyres?

popular
Balenciaga is suing production company following offensive ad campaign
The trailer for Channel 4's Vardy V Rooney: A Courtroom Drama has dropped
Olivia Wilde struggling after Harry Styles break-up
3 simple tips to get your nails in shape ahead of Christmas
Olly Murs slammed over 'misogynistic' lyrics in 'shocking' new single
"I've got nothing to hide": Ekin-Su confronts Davide over afterparty video
Kim Kardashian addresses Balenciaga's disturbing campaign
You may also like
2 days ago
Woman issues warning after TikTok cleaning hack caused fire
1 month ago
Jonathan Joly slated for sharing inappropriate video of daughter on TikTok
1 month ago
The best Halloween costumes inspired by viral 2022 moments
2 months ago
What is 'quiet quitting' and why is everybody talking about it?
2 months ago
Janice Dickinson defends body-shaming on ANTM
3 months ago
TikTokers have revealed Kate Middleton's secret trick for looking great in photos
Next Page