Sex Siopa is Ireland's first health and design focused sex shop and for the latest in our series of editorials focusing on Irish Women in Business, we caught up with the brains behind the operation, Shawna Scott, to find out more about the venture.

Scott's goal is to give customers the best experience possible by stocking bodysafe, well designed toys and accessories as well as providing them with current, up-to-date information about toy care, safe sex, and the products themselves.

Shawna shares with us her path to success, how she made the transition from dropping out of college to owning and running her own business, breaking the taboos about the use of sex toys and the importance of networking. 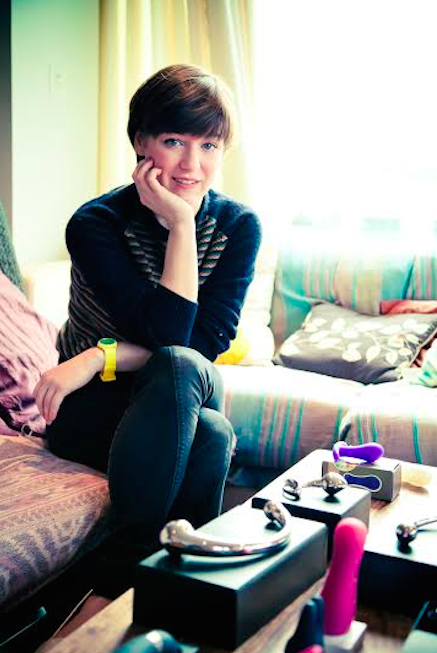 END_OF_DOCUMENT_TOKEN_TO_BE_REPLACED

What age were you when you decided to set out on your own?

I was 26. I don't have a business background. I'm actually a college dropout, but I've always had a very strong urge to be self-employed. I was at an age where I didn't really have anything holding me back. I didn't have much money, but I didn't have any loans or mortgages either, so it was the perfect time for me.

END_OF_DOCUMENT_TOKEN_TO_BE_REPLACED

What spurred on this venture?

I've always had an interest in human sexuality, but around 2011 I was back home in Seattle shopping for a vibrator. I popped into Babeland, a female founded sex shop that's sort of the go-to spot for Seattleites. It was a totally comfortable shopping experience, and the store was beautiful. I wanted to do something like that in Ireland, because I didn't see anything like it here. There were certainly no shops that specifically stocked bodysafe toys.
Bodysafe refers to a toy being made from materials known to be safe for use on all parts of the body including internally. You'd think that should just be standard when it comes to sex toys, but the industry is almost totally unregulated so it's up to retailers and consumers to do their research. I knew from the start I only wanted to stock bodysafe products as that's all I am comfortable using, and I wanted my customers to feel safe and comfortable as well!

Did you have many doubts starting up?

Of course! I was starting a business in a recession. It was also the type of business that not a lot of people were willing to talk about, so I wasn't sure if there was even a market for it here. I just had my intuition to go on. I had to trust that my idea wasn't completely crazy and that people would 1) care about sex toys and 2) care that those sex toys were well designed and made from bodysafe materials.

END_OF_DOCUMENT_TOKEN_TO_BE_REPLACED

Was it difficult choosing staff or people to work with?

Well not really. I'm a sole trader so I don't have staff. My boyfriend has been a great help and has been my biggest supporter. If I'm pulling a late night working on content, he's right there with me working on code for the site and making the tea. He's constantly pushing me to be better and better. I think his end game is for me to be super successful so he can be a kept man.

What has been your biggest barrier/ hurdle you've overcome?

Definitely advertising. Advertising is difficult for most start-ups, but multiply that by about 100 when you sell adult products. Facebook and Twitter won't let me advertise with them, and some of the mainstream Irish publications would still be quite uncomfortable allowing an adult business to advertise with them as well.
I've decided to work my way around that by advertising with smaller, free magazines like Rabble who have exceptional content; and by proving myself as a legitimate business by picking up a couple of awards along the way.

Have you had many mentors?

I've had some wonderful people who have influenced me over the years. Sex advice columnist Dan Savage has always been a firm favourite of mine. I reached out to one of Babeland's owners, Claire Cavanah, and Tantus Silicone's Metis Black when I first started out and they both gave me some very good advice.
Here in Ireland, Damien Mulley of Mulley Comms. has been such a great help. He's one of those people who doesn't muck about, and has always had time for me.

What advice would you give to somebody starting off?

It's totally ok to not know everything right off the bat. Like I said, I don't have a business background, and I think that has really put me at an advantage and liberated me. I can throw as many ideas at a wall and see what sticks. Also network with people you actually find interesting. Don't just network with people to try to sell them something. I've made a load of really great business and media contacts over the past 18 months, because they are people I respect and look up to and genuinely get on with.
What’s the greatest piece of advice you've ever been given?

Best advice I was given was don't do something just because someone professional told you to. I had quite a few graphic / web designers who told me I should change my business name, and I'm so glad I kept it and did my own branding. That name is one of my favourite things about the shop!

What's been your greatest moment?

I've had so many awesome moments, but winning the Realex Fire Web Award for Best eCommerce last November has really been a big highlight. The first thing I did when I got home was Skype my parents. They were so proud and any doubts they had about me starting a business in a recession, certainly disappeared after I won the award.
Also, hearing Ireland's only clinical sexologist Emily Powers Smith and Ryan Tubridy talk about Sex Siopa and actually Ryan use a phrase along the lines of 'adult toy show' on his morning radio show was very surreal, but very cool!

Be sure to keep an eye out for some interesting pieces about sex toys as we get up close and personal, asking Shawna and SexSiopa.ie the questions we all want answered.

For more information on Shawna and her venture you can follow Sex Siopa out on Twitter and Facebook, and be sure to check out the extensive rang of toys on SexSiopa.ie.

popular
Love Island’s Afia explains why Gemma’s dad has not been mentioned on show
Two dumped islanders have confessed their feelings for each other since leaving the villa
Why Are Men so Obsessed With Boobs? The Answer is Pretty Surprising...
Here Are The Top 20 Most Common Pin Codes in The World
Selling Sunset's Maya Vander experiences miscarriage
Shaughna Phillips brands Love Island heart rate challenge "fixed" and "vile"
Outrage as woman says doctor told her to "be quiet" during labour
You may also like
3 years ago
The one thing that couples should do together every day
3 years ago
The three questions you should ask before ending a relationship
3 years ago
Apparently, living together before marriage can have THIS side effect
3 years ago
Research suggests this physical trait makes for a better relationship
3 years ago
Science says this is how many dates you have to go on before you find 'The One'
3 years ago
The age you get married could affect whether you divorce or not
Next Page