It turns out cats do recognise their names...and will ignore you just for the hell of it

A new study has found that cats do understand when their name is being called by their owner, but they won't always do anything about it.

A study led by Atsuko Saito, a behavioural scientist at the University of Tokyo, published in Scientific Reports called upon 78 cats from households in Japan and cat cafés. It made use of the habituation-dishabituation method, which basically determined if a cat could identify its name from words that are so familiar to have lost all meaning.

It found the animals had clear responses to their name being called out by its owner as well as responses, albeit lesser, when called out by strangers. 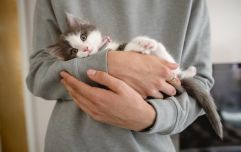 END_OF_DOCUMENT_TOKEN_TO_BE_REPLACED

“I think cats associated their names with some rewards or punishments,” Saito told Scientific American.

“There is no evidence that cats have the ability to recognise themselves, like us. So, the recognition of their name is different from ours.”

The idea of cats only recognising their name when there's something in it for them, such as food or attention, chimes with any owner who has been ignored when calling for their pet.

“This new study clearly shows that many cats react to their own names when spoken by their owners,” says biologist John Bradshaw from University of Bristol’s Anthrozoology Institute.

“Cats are just as good as dogs at learning. They’re just not as keen to show their owners what they’ve learned.”

Saito believes this finding leads to the possibility that cats are capable of understanding multiple words and commands, like dogs, but they are just unlikely to doing anything about it. Because they're evil (and that's why we love them).

popular
16 and Pregnant star Jordan Cashmyer dies aged 26
Gardaí seize two cars linked to Ashling Murphy death as they question new suspect
Woman dies following Co. Meath house fire
Here's where all the 149 tickets that won €36,687 in Saturday's Lotto were sold
A celebrity hairstylist just shared a genius hack for the perfect messy bun
Dancing on Ice professional Sean Rice dies at 49
Giant asteroid "bigger than any building" to pass Earth on Tuesday
You may also like
1 week ago
Hero dog saves hiker's life by lying on top of him to keep him warm
1 month ago
Urgent appeal for dog blood donations as stock shortage worsens
1 month ago
DSPCA urges people not to abandon their older pets
1 month ago
DSPCA and Gardaí rescue over 30 puppies and dogs from Dublin apartment
2 months ago
Pet dog catches Covid from its owner for first time in UK
3 months ago
Teens charged after killing 14 kangaroos in Australia
Next Page