Last night actor and member of the Travelling Community John Connors made an appearance on the Late Late Show with Ryan Tubridy  and made some bold and emotionally affecting statements about inequality and discrimination that Travellers face.

Since then, Connors has taken to Facebook to write a powerful statement, damning the institutional discrimination in place against the Travelling Community, and criticising Tubridy for playing 'devil's advocate'.

He then went on to list incidents of discrimination that have occurred against travelling community, from name-calling to governmental failures. 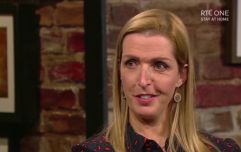 END_OF_DOCUMENT_TOKEN_TO_BE_REPLACED

It's all there in black and white.

"What about 14-year-old Aaron Joyce from ashbourne who's body was refused from his local funeral home?"

"What about the thousands of settled people who protested against Travellers living in Tallaght in the 80s with the slogan 'Knackers out'?"

"See Ryan you and me live in different worlds. My world has shaped me in such a way that i have the ability look past stereotypes, question popular opinion, think for myself and have empathy for people who have it hard or are experiencing injustice.You live in a comfortable bubble. Enjoy it."

There has been allot of strong reactions to my interview on the late late. Some positive, some racist, some didn't like...

popular
Fundraiser set up for boy attacked by pit bull in Wexford
The trailer for Channel 4's Vardy V Rooney: A Courtroom Drama has dropped
Kanye to give Kim Kardashian $200k in child support every month
Balenciaga is suing production company following offensive ad campaign
"I've got nothing to hide": Ekin-Su confronts Davide over afterparty video
Tasha Ghouri makes it clear that she and Andrew Le Page aren't engaged... yet
It looks like Harry Styles and Kendall Jenner could be getting close again
You may also like
1 day ago
The Late Late Toy Show was the most watched show of the year
2 weeks ago
The Late Late Show is set to give Vicky Phelan a musical tribute on Friday
3 weeks ago
Bono and Ryan Tubridy are among the "most admired" people in Ireland, apparently
1 month ago
Joanne McNally is set to be on tomorrow's Late Late Show
2 months ago
Jamie Lee Curtis among incredible lineup for tomorrow's Late Late Show
2 months ago
Ekin-Su Cülcüloğlu brands Ryan Tubridy a "genius" after Late Late Show
Next Page