This is very cute.

A video featuring one of President Michael D. Higgins' dogs has gone viral, with the pup desperate to get his owner's attention as he was giving a TV interview.

In a video uploaded to the Irish President's official TikTok account, you can see the dog named Misneach playfully paw at President Higgins as he speaks to RTÉ. 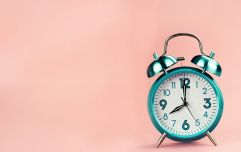 END_OF_DOCUMENT_TOKEN_TO_BE_REPLACED

Not satisfied with the lack of attention he was getting, the puppy even took to gnawing at the President's clothes and fingers.

All the while, President Higgins continued the interview, undistracted by Misneach's desperate ploys, which is some feat.

While Misneach did not make an appearance in the broadcasted interview, the behind-the-scenes TikTok clip has since been viewed over 150,000 times, with many taking to Twitter to say some variation of "Who's a good doggy."

While our President was speaking to the cameras his pupper #Misneach chewed his hand and wanted attention and its by far the best thing I've seen today. The kindness radiates out of him. ?? #Love https://t.co/Lj1goDjCbX

How gorgeous! There are treats in that jacket pocket aren’t there, Misneach? ? https://t.co/qB8j55qlSQ

Misneach is me when my fella turns away for one second https://t.co/Zb9XCznKwM

Meanwhile, one user praised the Irish President for his bravery.

You can watch the TikTok video below.

Featured Image via President of Ireland

Girls With Goals || Her · Ep.161: Feeling Peachy - Sharon Keegan of Peachylean on being an absolute BOSS!
popular
The fashion world is OBSESSED with potato brown right now – and for good reason
Woman buys 148 year old house, goes viral after finding secret passage way
Kate Middleton has addressed the rumours that she's pregnant with her fourth child
More footage of Tristan Thompson cheating on Khloe has emerged
London Fire Brigade issues warning over the swing TikTok trend
QUIZ: Can you beat Ross's quiz in Friends?
Ewan McGregor's ex Eve Mavrakis speaks out about his new relationship
You may also like
3 days ago
Two children hospitalised in Dublin after eating cannabis sweets
1 week ago
These 14 Dublin attractions are opening their doors again next week
1 week ago
Pregnant teachers and SNAs will continue to work from home for rest of school term
3 weeks ago
Saturday set to be one of the hottest days of the year so far
3 weeks ago
Maternity hospitals can now begin to ease visitor restrictions says HSE director
1 month ago
Almost 40% of Leaving Cert students have chosen not to sit the Irish exam this year
Next Page