Game of Thrones Fan? This Is Something You HAVE To Do!

Did you know that the real Westeros is mostly found in Northern Ireland?

If you’ve already screamed and shouted at the television through four series' of the hit HBO drama based on George R.R. Martin’s novels, we have just the rip for you.

Last summer, Her.ie hit the road for a special Game of Thrones trip to Northern Ireland, one of the main filming locations for the TV show and greeted some of the cast members at a pretty special red carpet event. 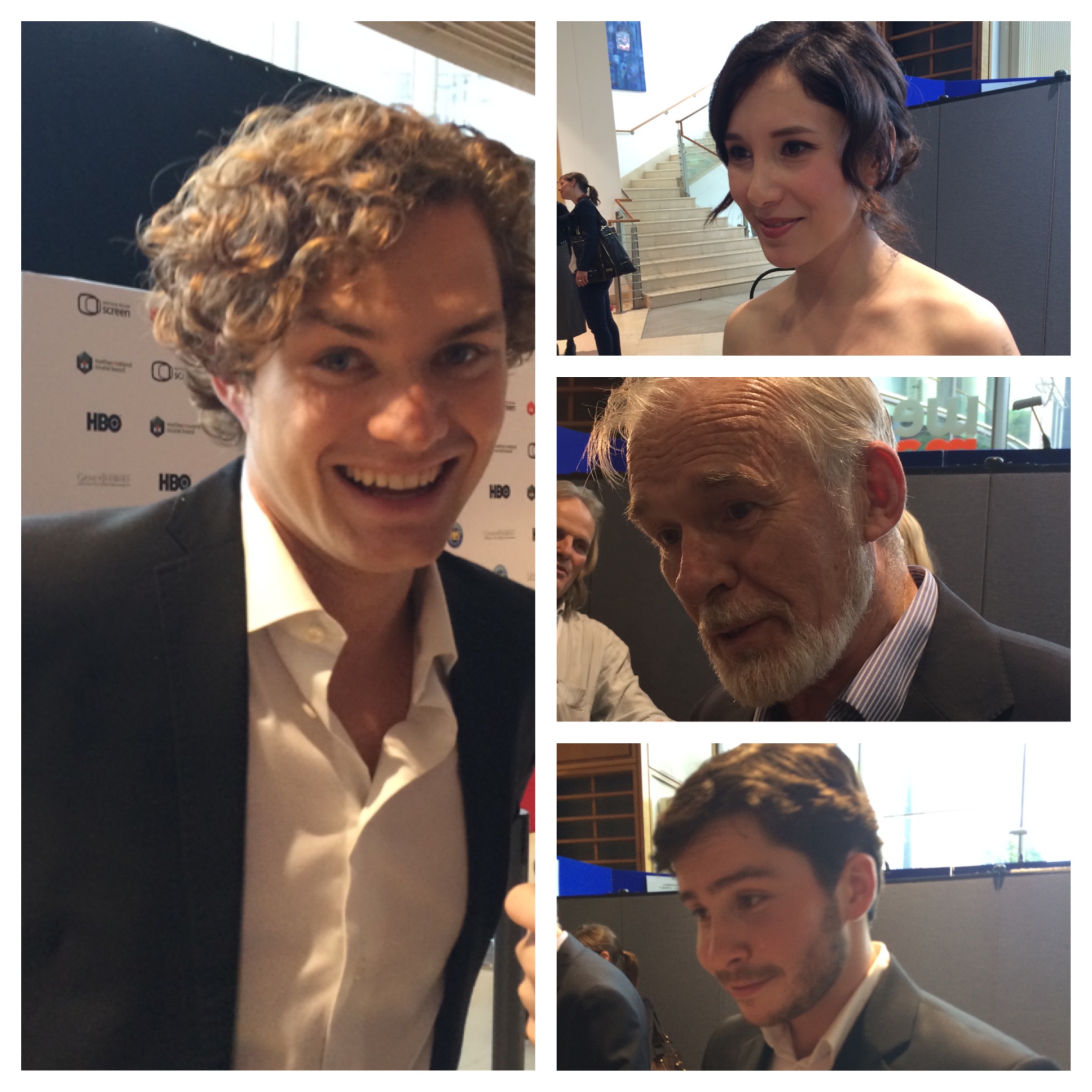 END_OF_DOCUMENT_TOKEN_TO_BE_REPLACED

Our visit coincided with the International Game of Thrones Exhibition’s visit to Belfast. From June 11th to 15th, the stunning display made its home in the Belfast Waterfront. Designed to transport viewers into Westeros, crucial props and costumes from the show were on display, along with behind-the-scenes looks and even a phenomenal ‘climb the wall’ experience using Oculus Rift technology. Of course, there was also a chance to sit on the Iron Throne. 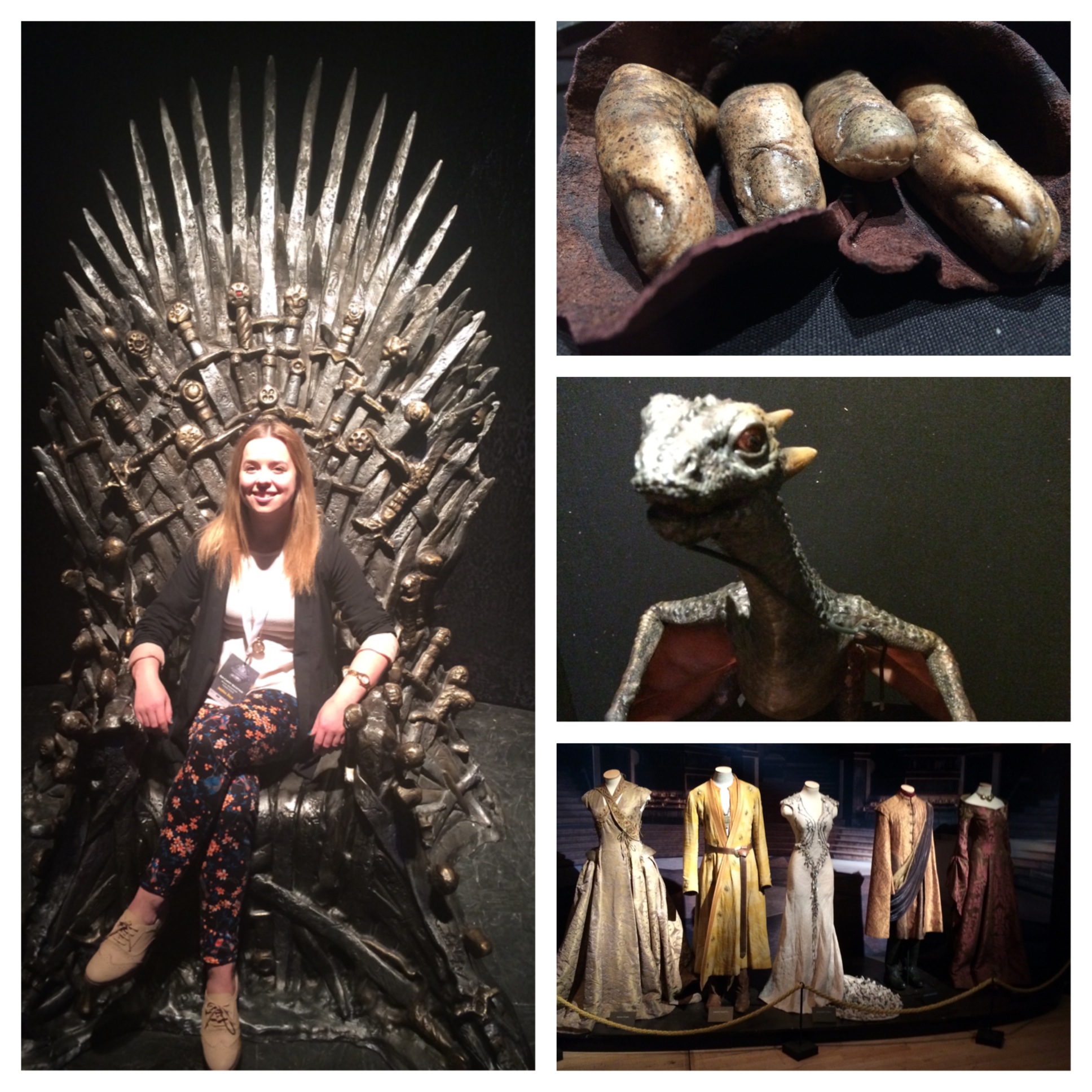 The exhibition may have since moved on, but the magic of GOT is still to found in the North. Officially the most successful HBO show ever made (the network that brought us The Sopranos, Sex and the City, True Blood and Boardwalk Empire – to put that in context), the series has received funding from the Northern Ireland Screen fund supported by Invest NI and part funded by the European Regional Development Fund.

END_OF_DOCUMENT_TOKEN_TO_BE_REPLACED

Filming of seasons one through four took place in the Titanic Studios in Belfast and across various locations throughout Northern Ireland including the Cushendun Caves, Murlough Bay, Ballintoy Harbour, Larrybane, Antrim plateau, Castle Ward, Inch Abbey and Downhill Strand.

Our visit was primarily to Castle Ward in County Down, which will be familiar to many as Winterfell, home of the Stark family. This gorgeous location overlooks Strangford Lough and the 820 acre demense is home to some breathtakingly beautiful scenery. 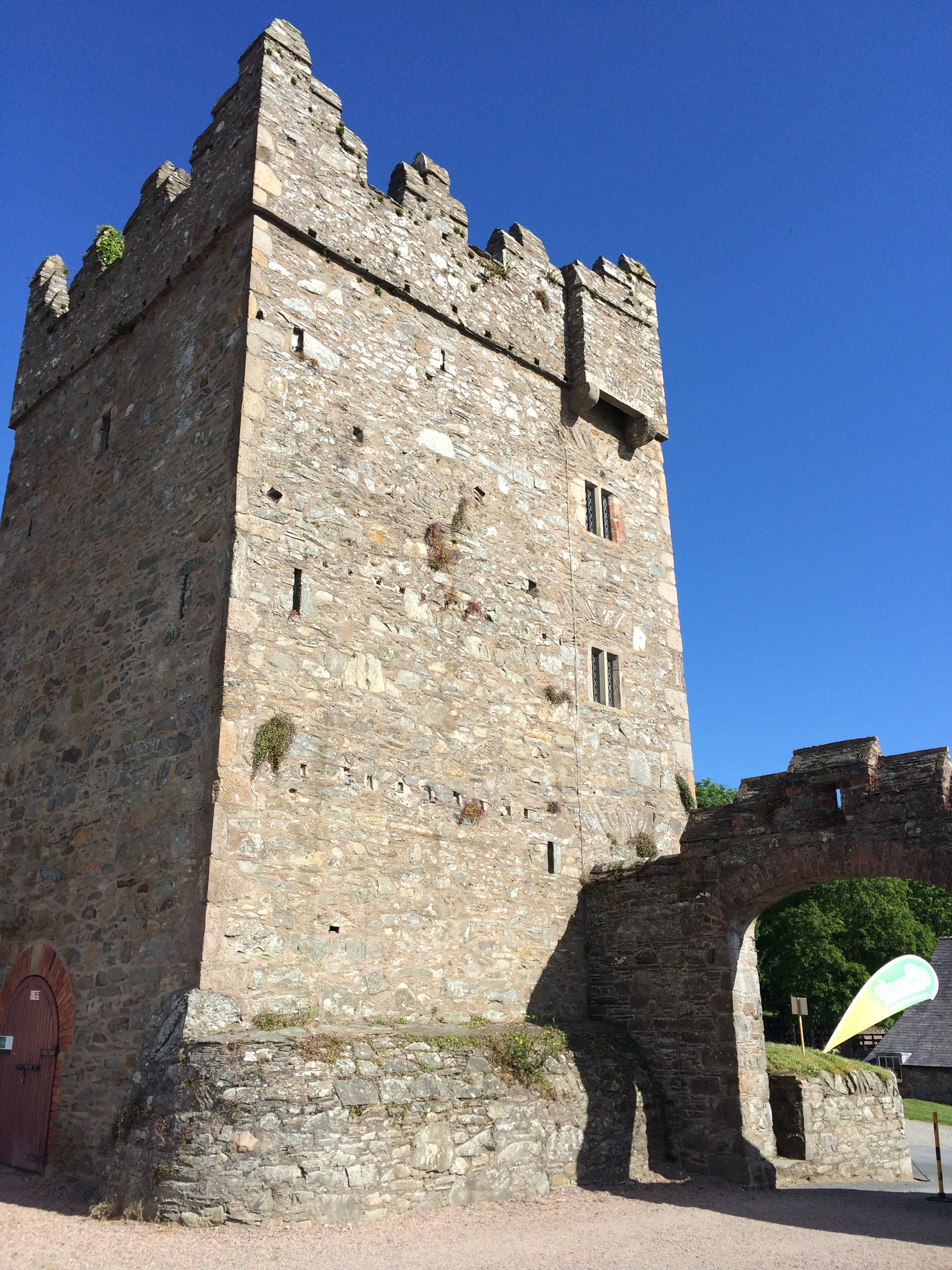 Castle Ward/Winterfell is also home to Clearsky Adventure Centre, where you can make like Bran Stark and Jon Snow, picking up a bow and arrow for some archery practice. 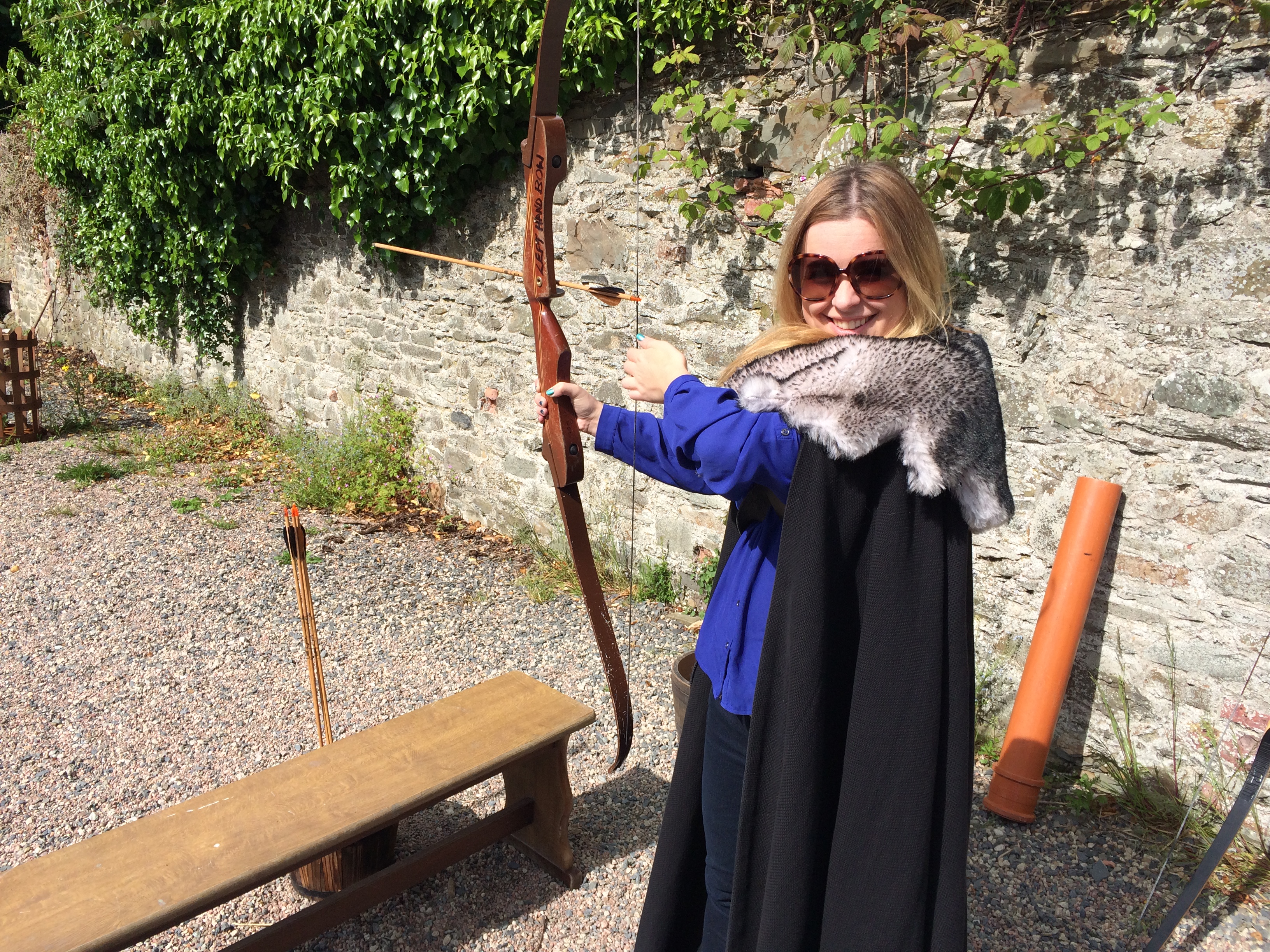 END_OF_DOCUMENT_TOKEN_TO_BE_REPLACED

To complete your look, you can don a cloak and claim a sword – plastic versions of the famous Valyrian steel creations Ice and Longclaw if you’re lucky. Castle Ward and its surroundings played host to scenes like those where King Robert arrived to Winterfell, Ned’s picnic, Robb’s camp, Lannister camp and Brienne’s confrontation with the Stark men, as well as the infamous Baelor Battlefield. 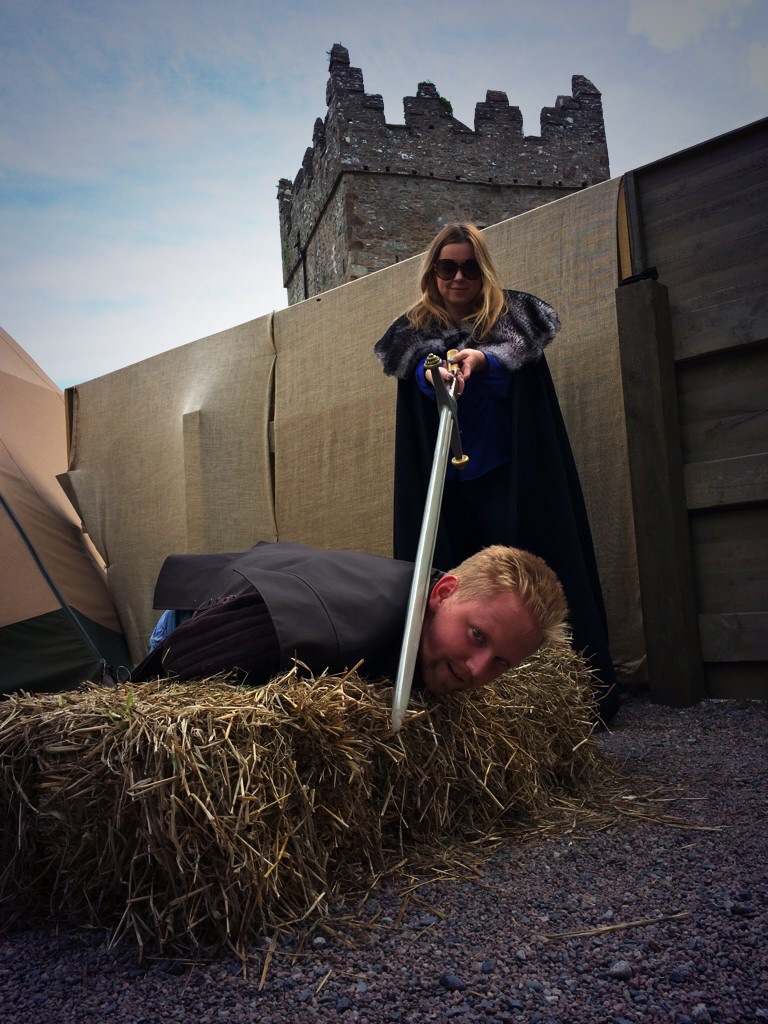 Post archery and some beheading (all in the name of fun), our group headed off on one of the two tours offered by Clearsky.  Robb's Trail takes approximately 75 minutes, while Tywin’s Trail takes about 135 minutes. Most visitors will opt for a self-guided tour with hired bikes and a souvenir map, but there is the option of hiring a guide from the Clearsky team also.

Not far from here you’ll find The Haunted Forrest from the series, known in real life as Tollymore Forest Park. This location was used for the opening scenes of the very first episode, where a member of the Night’s Watch finds the dismembered Wildling bodies, and the scene where Ned Stark and co find the direwolf pups.

Our resident Game of Thrones superfans were spellbound by the trip, but of course that’s only scratching the surface of what Northern Ireland has meant to Game of Thrones, and indeed vice versa. Other famous locations include:

Dragonstone – Downhill Beach in Derry, an 11km stretch along the Causeway Coast, seen in season two where Stannis pulls the flaming sword. “The night is dark and full of terrors.”

The Iron Islands – Ballintoy Harbour, situated on the North Antrim Coast between the Giant’s Causeway and Carrick-a-Rede Rope Bridge, seen when Theon Greyjoy arrives back to the Iron Islands and meets his sister Yara.

The Stormlands – Cushendun Caves, Co Antrim. These caves, formed over a period of 400 million years, form the setting for the season two scene where Melisandre gives birth to the shadow baby.

The Kings Road – The Dark Hedges. This beautiful Northern Ireland landmark is seen in the series as The King’s Road, where Ayra travels when she makes her way from King’s Landing. The stunning avenue of Beech trees were planted by the Stuart family in the eighteenth century.

With no sign of the next book in the series and a year to wait before Game of Thrones is back on our screen, why not take a trip up north and discover the place that made the beloved show possible. A word of warning though: travel soon – Winter Is Coming.

popular
Irish girls name was the most used Irish name in the United States last year
Why Are Men so Obsessed With Boobs? The Answer is Pretty Surprising...
Woman saved from hostage situation after leaving note on food delivery order
Love Island's Remi says arguments with Jacques "ruined" his time on the show
Buying fake designer goods abroad this summer can have some serious consequences
This high street interior collection is everything we want out outdoor space to look like
There's a new online Spotify game and you legit won't be able to stop playing it
You may also like
2 weeks ago
Kellie Harrington to receive Freedom of Dublin this weekend
2 weeks ago
No flights missed due to queues this weekend, Dublin Airport claims
2 weeks ago
Black Eyed Peas apologise to fans at Galway concert for calling Ireland part of UK
3 weeks ago
Investigation underway following death of 6-year-old boy in Offaly hotel
3 weeks ago
Women living in Direct Provision call for their right to privacy to be respected
3 weeks ago
Dublin Airport passengers may need "proof" of arrival time to get refund
Next Page