Christmas time is probably the busiest time of the year.

While summer can be hectic for going out and enjoying the long days, everything with Christmas is packed into a few weeks.

Every Christmas party, dinner, night out and meet up is basically carried out within a month - so it's safe to say we end up spending a lot of money.

Well, Bank of Ireland did some research and found that the average person spent about €267 on dinners, takeaways and taxis during the festive period.

But that's not all we're spending on - a lot of us are very cheeky and when buying presents for others, decided to buy a little something for ourselves too.

A massive 7 out of 1o people self-gifted during Christmas - because treat yo'self, right? 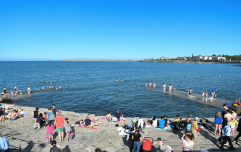 END_OF_DOCUMENT_TOKEN_TO_BE_REPLACED

31 percent of us set a budget before going out gift shopping, but then another third spent more than intended. 69 percent of us will actively seek out bargains though. So, it's pretty give and take.

Drinks, Christmas Eve jammies and Christmas Day outfits are what most of us spend our money on however a lot of us (30 percent) are on the lookout for cashback offers.

The research also states that 1 in 5 found themselves shopping last-minute... which we have to admit, we were totally guilty of. Anybody else?

popular
'Beard-baiting' is now apparently a dating trend - and we're all for it
Curtain bangs are trending - here's everything you need to know
Will there be a second season of Gilmore Girls: A Year In The Life? Here's what we know
Kate Middleton has addressed the rumours that she's pregnant with her fourth child
Eight Of The Best Films And Documentaries On 9/11
QUIZ: How well do you really remember the first episode of Sabrina The Teenage Witch?
Here's what happens on every day of your menstrual cycle (roughly)
You may also like
3 days ago
6 places to get boujie takeaway in Dublin over the next few weeks
4 days ago
Mars to change name of Uncle Ben’s rice to Ben’s Original
5 days ago
10 Dublin restaurants with outdoor areas we'll be hitting up for the next 3 weeks
1 week ago
Dublin restaurant nominated for Best Luxury Steakhouse in the world award
1 week ago
Lindt has just opened a chocolate museum with a massive chocolate fountain
2 weeks ago
A controversial ranking of Lindt truffles from worst to best
Next Page