Customers got a little more than they bargained for at an Australian cafe this week.

A woman sparked a fierce debate after criticising a cafe owner who complained when she changed her baby's nappy on one of the cafe's tables.

The new mum wrote a negative review about the Brisbane cafe after she changed her 12-week-old baby twice in front of other diners.

"My baby has been having difficulty breastfeeding and gaining weight so I sat to enjoy my coffee and feed her while there," she wrote. "She then had a dirty nappy so naturally I go to change it. I put my change mat down to change her so that in this 30 degree heat she doesn't develop a rash sitting in it on our way home.

END_OF_DOCUMENT_TOKEN_TO_BE_REPLACED

The woman, who used the name Stephanie Plahn, said that the waitress gave her a dirty look and made a comment as she cleared away her coffee cup. She then approached the manager and asked if there was a problem. She responded that it was highly inappropriate. 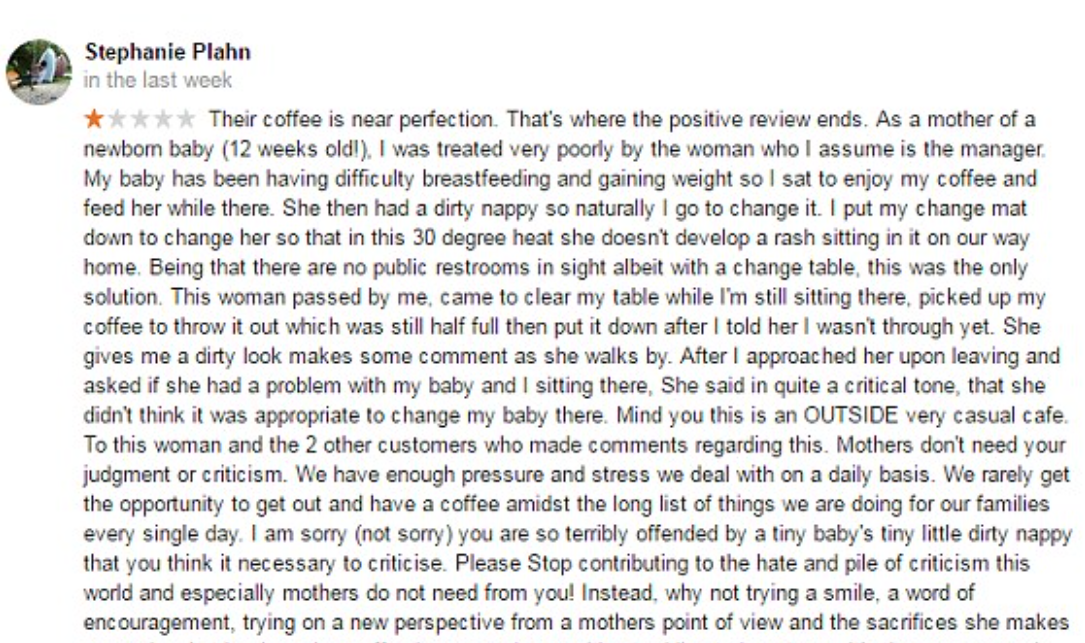 "To this woman and the 2 other customers who made comments regarding this. Mothers don't need your judgment or criticism. We have enough pressure and stress we deal with on a daily basis. We rarely get the opportunity to get out and have a coffee amidst the long list of things we are doing for our families every single day. I am sorry (not sorry) you are so terribly offended by a tiny baby's tiny little dirty nappy that you think it necessary to criticise."

Owner of the cafe, Jocelyn Ridgeway responded by saying:

"I don't think there is much more to say other than in in the same way you don't expect to have to feed your baby in a toilet, I don't expect people to eat while a nappy is being changed." 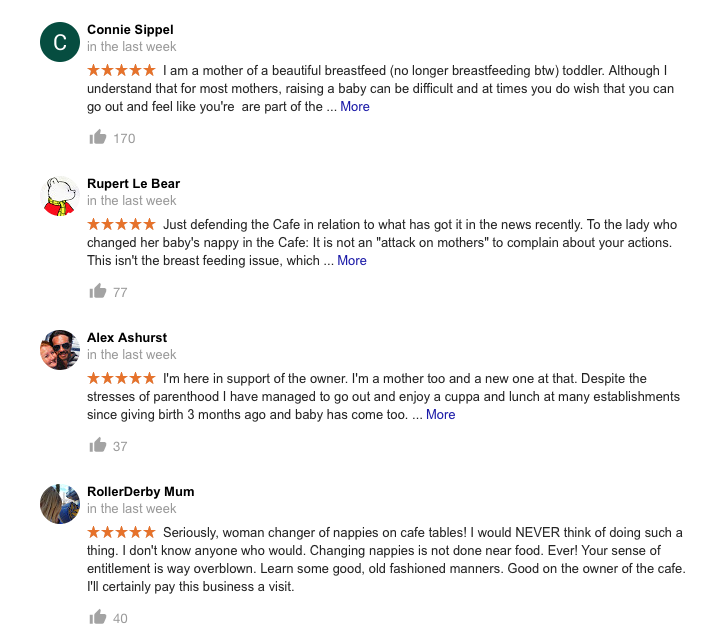 Her comments have been backed up by many, with one commenter saying:

"Seriously, woman changer of nappies on cafe tables! I would NEVER think of doing such a thing. I don't know anyone who would. Changing nappies is not done near food. Ever!"

popular
Shirley Ballas books breast exam after Strictly viewers spot lump
QUIZ: How well do you remember the first episode of You?
You can now apply for tickets to the Late, Late Toy Show
Hollywood couple Joe Manganiello and Sofia Vergara seen enjoying a Cork chipper
You can now get paid to eat wine and cheese for Christmas
Tributes paid to Limerick based blogger and model Patrick McLoughney
You can now live in the iconic house from Sabrina The Teenage Witch
You may also like
4 days ago
The internet can't get over this picture of Tommy Fury with his brother Tyson
1 month ago
The 'secret' Zara label signs that'll apparently help you get the right size every time
1 month ago
TikTok shows just how extreme Irish dads can be
1 month ago
Meet cloud bread – the three-ingredient baking trend going viral right now
1 month ago
Cereal milk lattes are trending – and it might change your breakfasts forever
2 months ago
This TikTok video finally showed me how to get the perfect messy top knot every time
Next Page