Two students were injured in a bizarre incident during a performance of a school play in Auckland, New Zealand yesterday.

Ambulance services were called to Saint Kentigern College in the city just after 9pm during the opening night of the school's production of Sweeney Todd, the musical about a demon barber who slits the throats of his clients.

Radio NZ reports that two cast members suffered what were initially described as 'neck injuries' halfway through the
second act. 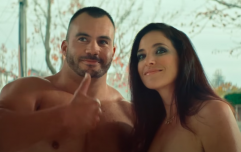 END_OF_DOCUMENT_TOKEN_TO_BE_REPLACED

One student was seriously injured while the other had moderate injuries, but are now both in a stable condition.

The principal Steve Cole said that they could have in hindsight used a plastic prop razor but that the blade had been worn down and wrapped in duct tape so they assumed they had taken the correct precautions.

"They haven't used that prop all the time, but the play has been rehearsed, doing scenes 40-50 times, and often with that prop, sometimes not, but the last six or seven dress rehearsals used that exact prop."

The school is speaking with police and WorkSafe is also investigating.

A cast meeting is being held this afternoon to decide if the show will go on, and if so, what they'll do differently to prevent it from happening again.

They're nothing if not committed.

Girls With Goals || Her · Ep.151: 'A Story Shared' - Aoife P. Rafter on blogging during a pandemic and living with CF
popular
'I feel betrayed': Curtis Pritchard on Maura Higgins and Chris Taylor's relationship
'I loved it': The childhood drug addiction that inspired The Queen's Gambit
Viewers praise Corrie for emotional scenes as Leanne's son Oliver passes away
Ross was never meant to say Rachel's name at the altar, Friends writer reveals
All the series and movies you need to see before they leave Netflix in December
Here's what happens on every day of your menstrual cycle (roughly)
Someone has ranked the penis size of men from all over the world
You may also like
4 weeks ago
New Zealand votes to legalise euthanasia, but not to legalise cannabis
3 months ago
New Zealand records first COVID-19 cases in 102 days
5 months ago
New Zealand reports new two cases of #Covid-19, first cases in 24 days
5 months ago
New Zealand declares itself virus free and drops #Covid-19 restrictions
11 months ago
One person has been killed, and several injured after a volcano eruption in New Zealand
1 year ago
New Zealand speaker Trevor Mallard feeds colleague's newborn baby during parliament debate
Next Page