Scrooge himself wouldn't stoop to this level.

A Norwegian newspaper has issued an apology this weekend after a bizarre obituary entry announced the death of Santa Claus.

The shocking classified ad even provided funeral arrangements, to be held on the 28th December at the "North Pole Chapel." 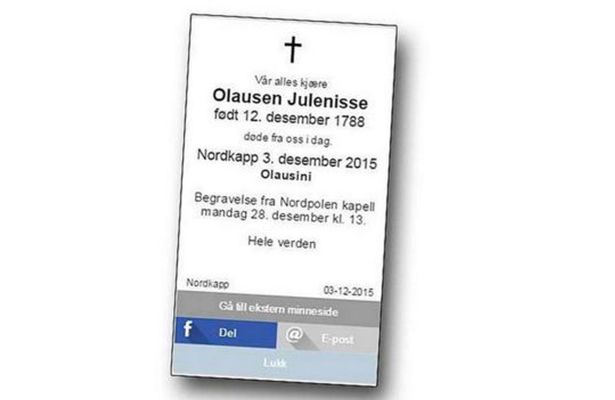 END_OF_DOCUMENT_TOKEN_TO_BE_REPLACED

The notice reads: "Dear Father Christmas, born 12 December 1788" and claims he died in Norway just before his 227th birthday.

Aftenposten is Norway's second-biggest selling newspaper, and has blamed the clanger on an "internal procedure error".

According to the Irish Mirror, a spokesperson for the publication said: "An error in Aftenposten’s internal procedures led to a fictional obituary of Santa Claus [being] published in our digital systems.

"Aftenposten has strict guidelines for both the content and use of symbols in our obituaries."

"This ad is a violation of these and should never have been published.

"We will find out what has happened."

We are not okay with this.

popular
Vogue Williams slams man who refused to swap seats with her on plane
Crown Paints advert receives 200 complaints over 'misogyny' and 'everyday sexism'
Adam Collard allegedly attacked on night out with Paige Thorne
Man arrested on suspicion of the murder of Irish man in London
This is why the world is obsessing over Adidas Gazelles
Christine Quinn won't be returning to Selling Sunset
Are we getting a mini heatwave in September?
You may also like
3 months ago
The Late Late Toy Show is being made into a musical
7 months ago
According to tradition, your Christmas tree should stay put for a while longer
7 months ago
Childline received over 1,000 calls from "anxious" children over Christmas
7 months ago
3 scnted candle hacks to make your home smell even more gorgeous this Christmas
7 months ago
Cheers! 3 delicious ways to pimp your Prosecco for New Year's Eve
7 months ago
Christmas Day rain warning issued for 5 counties
Next Page