Now we know why some non-ginger men have ginger beards

We all know a few.

It's something that has stumped us for years now, ever since our male mates started growing them.

Well, it turns out that it's not just some random coincidence... it's all down to genes.

According to Vice, a Dutch scientist called Petra Haak-Bloem explained that hair colour is all down to a gene called MC1R on chromosome 16.

"This means that there isn't one single gene that's dominant over the rest, but all genes influence each other," Petra told the publication.

"Generally speaking, people inherit hair colour not only from their parents, but also from their grandparents and earlier ancestors.

“The [pheomelanine gene is mutated] and accumulates in the pigment cells and the person ends up with red hair and fair skin.” 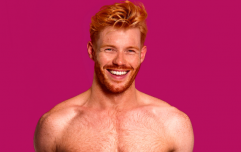 END_OF_DOCUMENT_TOKEN_TO_BE_REPLACED

However, if a person has just one of the mutated genes, red hair can appear in sporadic places around the body as a result.

And so, men can end up with red hairs in their beards, on their eyebrows or even on their chests.

You learn something new everyday!

Girls With Goals || Her · Ep.153: Scholarship Squad - We chat to Facebook's Claire O'Hara about our Smurfit Scholarship fund.
popular
Irish people urged to send a hug to loved ones on National Hugging Day in aid of Ronald McDonald House
Matthew Perry's dad was a character on Friends and how did we not notice?
Robbie Williams "fairly sick" with Covid while holidaying in Caribbean
Seven Things You May Not Have Known About... Garth Brooks
Gilmore Girls star says he didn't storm the Capitol, praises those who did
Someone has ranked the penis size of men from all over the world
Here's what happens on every day of your menstrual cycle (roughly)
You may also like
1 year ago
Enjoy a magnificent stay at Mount Juliet Estate along with a luxury spa treatment for two
3 years ago
Sniffling with a cold? This remedy will make you feel better FAST
3 years ago
Ginger males feel more confident thanks to Ed Sheeran's fame
3 years ago
This drink is guaranteed to reduce that pesky tummy bloat
3 years ago
Sniffling with a spring cold? This ancient remedy will make you feel better FAST
4 years ago
Emoji creators give update about whether red heads will ever have one
Next Page