This student made a statement on her big day by taking to the stage with a Pride flag.

Ciara Cinnamond was celebrating her graduation from Queen’s University in Belfast when she decided to show her support for the LGBTQ community by adding the rainbow flag to her ensemble. 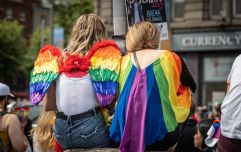 Know Your Queer History: "It was a dangerous time, and people tend to forget that"

END_OF_DOCUMENT_TOKEN_TO_BE_REPLACED

The day of her graduation, a same-sex marriage rally was taking place in the city so Ciara wanted to make her views clear by bringing a Pride flag to the stage.

“Nothing was stopping me from making a statement on the same day thousands marched for equal marriage.”

Nothing was stopping me from making a statement on the same day thousands marched for equal marriage #MarriageEquality @brendanhughes64 https://t.co/xJ2kY2axIk

Northern Ireland is now the only part of the UK that doesn’t allow same-sex marriage, a law that drew thousands to the streets of Belfast on Saturday.

popular
Meghan was right to say Archie "won't be a prince" under Prince Charles
Love Island featuring show's first contestant with a disability
Opinion: It's your wedding, you can have an 'adults only' day if you want
Friends actor James Michael Tyler battling Stage 4 cancer
Laurel Hubbard to become first transgender Olympian
5 things we know for sure about this year's Love Island
Friends Star James Michael Tyler Files For Divorce
You may also like
2 days ago
10 books with LGBTQ+ themes to add to your reading list this Pride month
2 weeks ago
Sophie Turner very subtly comes out as... not straight
2 weeks ago
Penneys new Pride collection drops this month - and we want it all
2 weeks ago
Jamie O'Herlihy: "At the end of the day, we're all just living our lives for us"
11 months ago
QUIZ: How well do you remember the 2005 movie Pride & Prejudice
11 months ago
'Extremely isolating': LGBTQ+ homeless community faces more challenges
Next Page