Opinion: More men need to publicly call out their teammates like the US fencing team

Yes, more of this please.

In case you missed it, the US men's fencing team took a huge stand against one of their own teammates during the Olympics last weekend.

When the team of four found out they'd be going to the Tokyo games, it wasn't all good news as it was immediately followed by Alen Hadzic being accused of sexual misconduct between 2013 and 2015 by three women.

END_OF_DOCUMENT_TOKEN_TO_BE_REPLACED

While he is denying the allegations and appealed a suspension to take him off the team, his three teammates are still fighting against having him fence alongside them.

Hadzic has also been banned from staying at the Olympic Village due to these allegations and was made take a separate flight over to Tokyo. 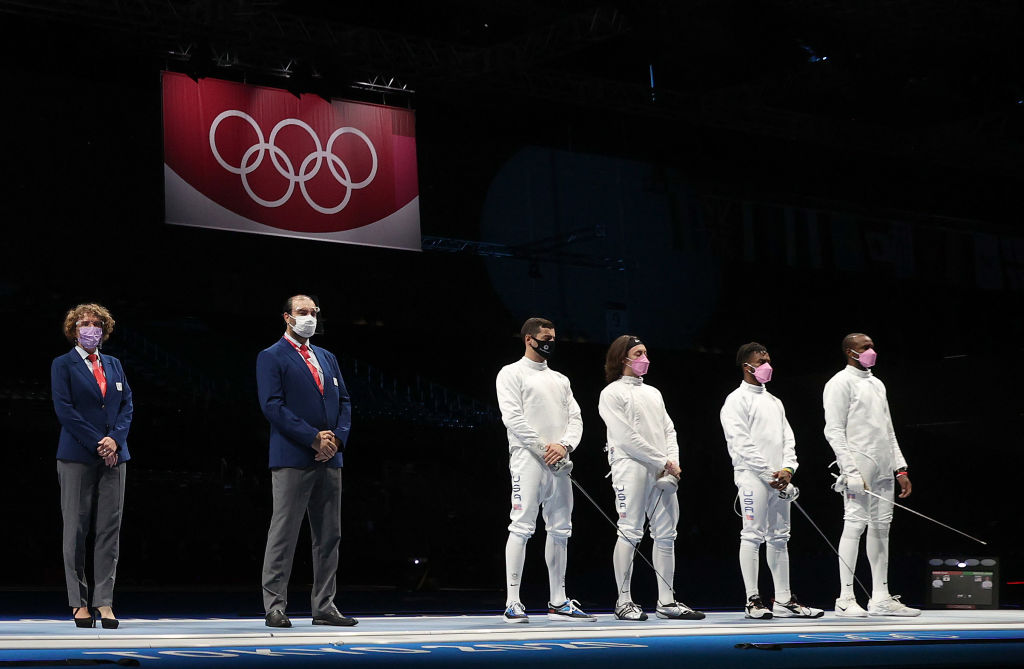 Making the stand against him, Jacob Hoyle, Curtis McDowald and Yeisser Ramirez all wore pink face masks to show support for victims of sexual assault, while Hadzic was singled out in a black mask.

END_OF_DOCUMENT_TOKEN_TO_BE_REPLACED

Knowing the allegations against their teammate and the fact that he was still allowed to compete was enough for them to want to disassociate from him, and we need to see this a whole lot more.

More and more in recent years, we're hearing of people in the public eye having allegations made against them like this, and as they become more common, we still see such little action being done.

When it comes to team sports, casts of TV series or films or even regular friend groups, lads often back each other up or simply don't call each other out for their behaviour.

#TeamUSA men’s epee team wore pink masks for their opening match at the Olympics as a show of support for sexual assault victims. Alen Hadzic— their teammate accused of rape and sexual assault— is on the left. Kudos to the team for taking a stand. #BelieveWomen pic.twitter.com/yRI4azelKN

By this, I mean that if a person witnesses or knows about their friend committing something like this and says or does absolutely nothing, they're a huge part of the problem too.

The way that these three US fencers didn't care what others thought or if it could potentially ruin their Olympic career, standing up and so clearly showing their support for survivors is something men need to do more of.

The stigma around not speaking up and holding back when it comes to this type of thing, keeping it to yourself to protect a friend or not telling them it was wrong out of fear, all needs to end.

Women have been endlessly asking that men make a stand for years, but it is so refreshing to finally see three men publicly show their support and so clearly not having any of it.

Not saying anything when you know is not good enough, we need to hold people accountable for their actions, especially when it's something as serious as the allegations made against Hadzic.

popular
Primark reintroduces female-only fitting rooms after two men walk in on woman
Davide Sanclimenti opens up on having kids with Ekin-Su Cülcüloğlu as he turns down Dancing On Ice
Anna Delvey is set to be released from prison
8-year-old Ukrainian girl stabbed in Clare 'out of danger'
Man and woman charged with murder of four year old boy in 2021
Woman tells Kate Middleton 'Ireland belongs to the Irish' during Belfast visit
Hilary Swank, 48, reveals she is pregnant, expecting twins
You may also like
39 minutes ago
Grey's Anatomy star Kate Walsh accidentally spills engagement news
1 hour ago
Meteor shower to be visible over Ireland tomorrow
1 hour ago
Samantha Womack to start chemotherapy after breast cancer diagnosis
1 hour ago
Every first-time buyer needs to check out this FREE virtual mortgage event
2 hours ago
Love Island's Dr Alex shares that he has ADHD
2 hours ago
My Therapist Ghosted Me adds a third 3Arena date
Next Page