A couple have been left stunned after their pet bulldog gave birth to a green puppy.

Trevor and Audra Mosher, from Nova Scotia in Canada, were delighted when Freya gave birth to a litter of eight puppies.

END_OF_DOCUMENT_TOKEN_TO_BE_REPLACED

But their happiness quickly turned to shock as she suddenly went into labour shortly after, giving birth to another female pup didn't quite look like the rest of her siblings - she had bright green fur.

The two were initially concerned, suspecting the puppy may be stillborn, but the little newcomer didn't have any health issues and has been thriving so far. 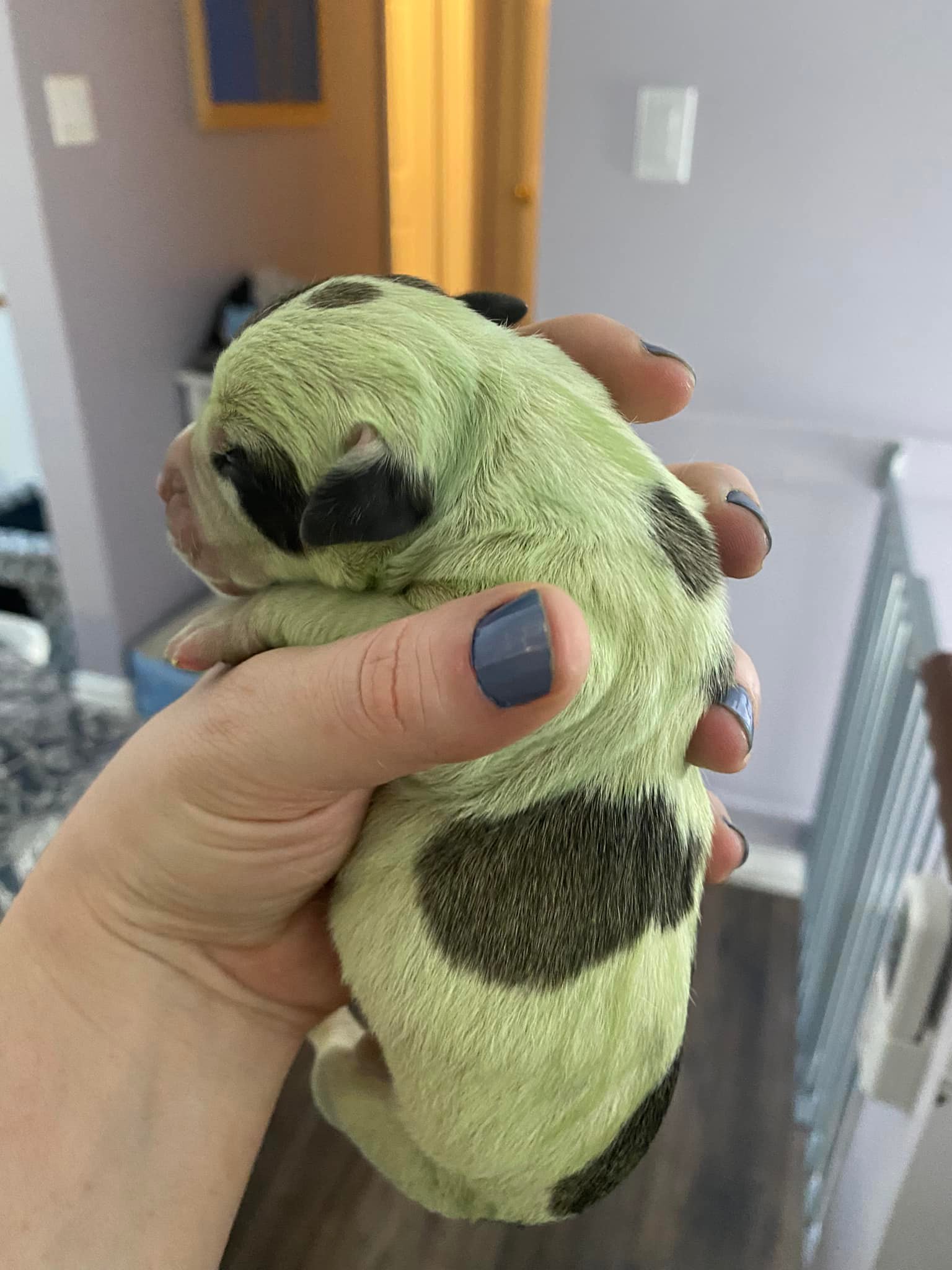 Speaking to Global News, Trevor explained: “We started to dry her off and noticed she was green and immediately again thought there was something wrong.

END_OF_DOCUMENT_TOKEN_TO_BE_REPLACED

"So we googled it, ‘my puppy is green, what’s wrong,’ and apparently it is very rare but it has happened a few times all over the world."

Trevor says he feels very lucky to have witnessed the rare occurrence.

“I’m kind of amazed, really. As rare as it seems to be, I feel very lucky to have witnessed it and be a part of it. I know you hear stories about things like that but to be there and witness it, it was good." 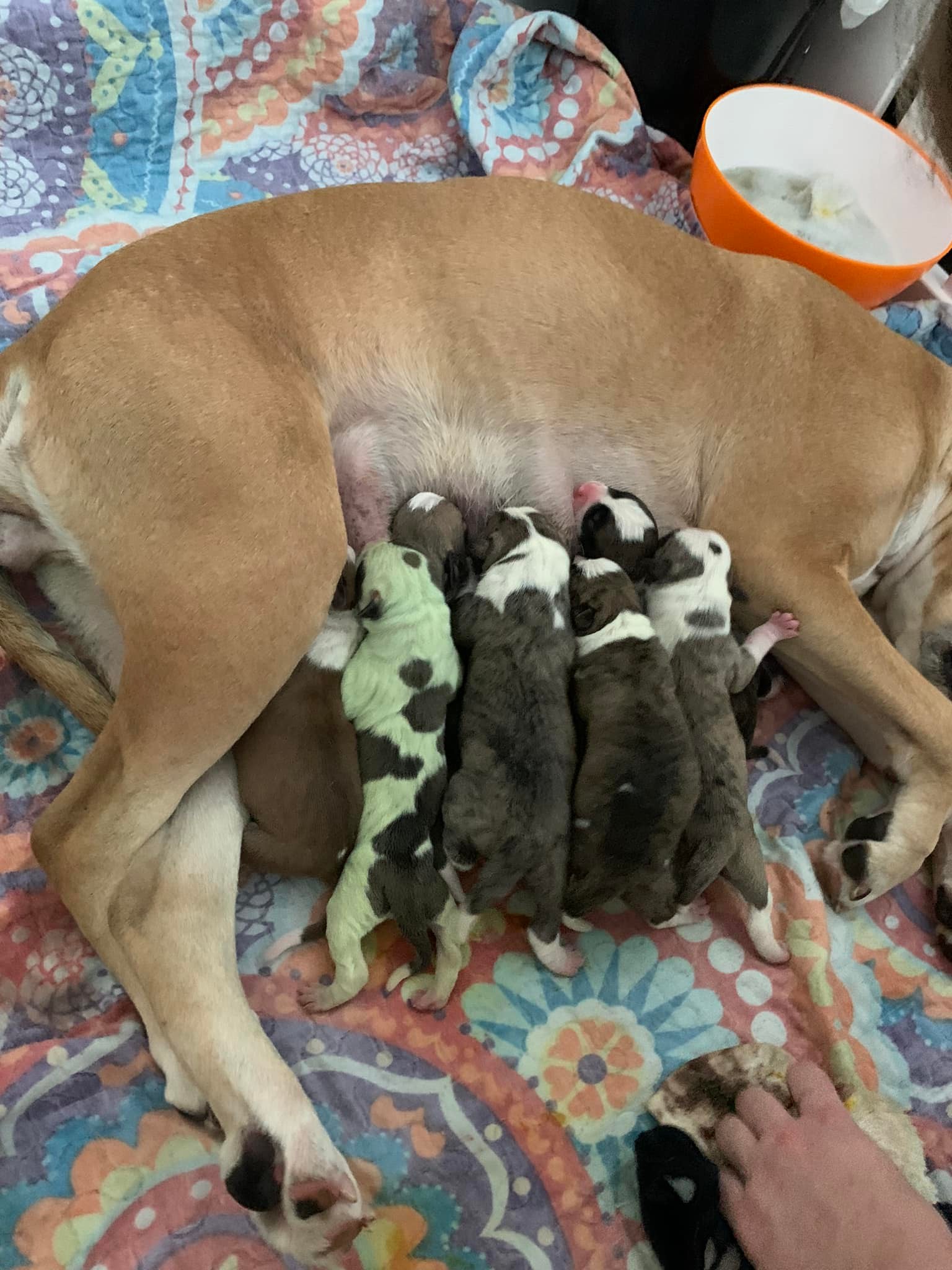 END_OF_DOCUMENT_TOKEN_TO_BE_REPLACED

The couple are now trying to decide what to call the unique arrival, with many social media users suggesting she be named after Fiona from Shrek. Others have come up with more green-inspired names like Wasabi, Hulkette, Clover and Lucky Irish.

According to The New York Post, the odds of a puppy being born with green fur are less than one in 10,000.

While rare, experts say the puppy's strange colour will fade over time. Audrey and Trevor said they wished the unique colour would stay for her entire life. But above all, they are glad she is perfectly healthy.

popular
Bride asks for divorce day after wedding following groom's disrespectful cake stunt
These are the most popular names for babies born in February
The Greatest Showman is becoming a Broadway musical and we need a second
Gwen Stefani reportedly pregnant with baby number four
'He's a changed man': Woman marries her 'high school bully'
Natalie Imbruglia's Torn is actually a cover and the original just isn't the same
Why Are Men so Obsessed With Boobs? The Answer is Pretty Surprising...
You may also like
4 months ago
"Home alone" – Prince Louis memes are taking over the internet
5 months ago
Andrew Tate has – finally – been banned from Facebook and Instagram
6 months ago
Sonya Lennon reveals ‘judgement’ her daughter, 17, experienced when buying pregnancy test
7 months ago
Here's how to make Hailey Bieber's TikTok famous Strawberry Glaze Skin Smoothie
7 months ago
Mass in Mayo church goes viral after spooky incident happens over livestream
7 months ago
People on TikTok are making 'healthy Coke' with just two ingredients
Next Page