'All pregnant women are at risk under the Eighth Amendment'

Today, between 10 and 12 women will leave Ireland for an abortion.

They travel to access services that their own country refuses to provide for them.

Under the Eighth Amendment, abortion is illegal except where there is a substantial risk to the life of the woman or girl. The law does not cover cases of rape, incest, or fatal foetal abnormality. 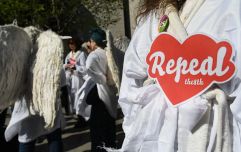 Yes, this is an historic day and yes, we will be celebrating

END_OF_DOCUMENT_TOKEN_TO_BE_REPLACED

The campaign to repeal the Eighth Amendment has gained considerable traction lately, with more and more people marching for choice every year.

Ireland's abortion laws have been long criticised by human rights groups here and abroad, with Amnesty International calling for the "urgent reform" of the laws "which are among the most restrictive in the world."

Taoiseach Leo Varadkar has said that an abortion referendum will be held next year, but the Eighth Amendment does not just restrict abortion services - it affects everyone who has the potential to become pregnant in Ireland.

Amnesty International are asking every woman, man, and person in Ireland - and beyond - to watch this video.

Here they explain, in their own words, why the Eighth Amendment needs to be repealed.

"This week, we launched a video which shows how all women and girls in Ireland are at risk of having their human rights violated because of the Eighth Amendment to the Constitution.

"If you haven’t seen it yet, take a minute to watch it now.

"The Eighth Amendment has an intolerable impact on women’s and girls’ health and choices. It can limit a woman’s right to make basic decisions about her own healthcare in pregnancy and about childbirth, and of course it severely limits access to abortion.

"We are campaigning to change this. We are calling for a legal and medical framework for abortion which respects the human rights of women and girls. We support calls for access to abortion on request at least in early pregnancy, and in later pregnancy in certain circumstances. We also call for the full decriminalisation of abortion.

"To achieve this, the Eighth Amendment must be repealed in its entirety.

"We have a chance to make a real difference to women and girls in Ireland. Together, we can work to ensure that future generations of women and girls live in a society that respects, protects and fulfils their human rights.

popular
Penneys has a perfect dupe for Charlotte Tilbury's Flawless Filter foundation
Airport outfits are all the rage as we head abroad - here are the 4 best ones
Gemma Owen gets to know Jack Keating as her head turns on tonight's Love Island
WATCH: The moment dad attacks 3-year-old son's suspected murderer in court
So it seems Ekin-Su once competed as Miss Ireland before Love Island fame
A 'hangover pill' has just gone on sale in the UK - and they ship to Ireland
Andrew and Dami both steal a kiss on the terrace on tonight's Love Island
You may also like
4 years ago
Taoiseach Leo Varadkar says yesterday was 'Ireland's second chance'
4 years ago
#HomeToVote: Thousands make the journey home to vote in the referendum
4 years ago
Group that placed the giant 'No' sign in the Dublin mountains release statement
4 years ago
Hozier releases a heartfelt video asking his fellow Irish citizens to Repeal the 8th
4 years ago
No campaigner Cora Sherlock pulls out of tonight's Prime Time referendum debate
4 years ago
Here's some clarity about the 'Her Body NO Choice' mural just off Camden Street
Next Page