Pretty, But Boring: Controversial Research Claims Attractive People Are a Bunch of Bores

Fancy a bit of controversial research? Of course you do! According to a new study today, beautiful people may have been blessed in the looks category, but when it comes to personality? Well, apparently they’re duller than a grey pair of knickers.

Psychologists at the Open University in the UK say that while beautiful women and drop-dead-gorgeous men have it going on physically, they’re far more likely to have an unattractive, boring personality.

In fact, the boffins found that people who are rated as being physically attractive are actually less outgoing, less friendly and spend more time talking about themselves rather than learning about other people. Come Shopping With Her: 10 Great Gifts for Him for Valentine's Day

END_OF_DOCUMENT_TOKEN_TO_BE_REPLACED

However, the study also showed that despite the fact that beautiful people have unattractive personalities, we still think that people who are pretty will be more interesting. This phenomenon has been nicknamed the “halo effect” by researchers because, inexplicably, good looking people tend to give off a good feeling to the rest of us.

“The results indicate beautiful people may tend to focus more on conformity and self-promotion than independence and tolerance,” said Lihi Segal-Caspi, one of the researchers. 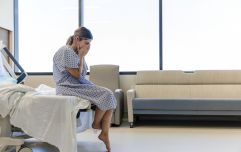 END_OF_DOCUMENT_TOKEN_TO_BE_REPLACED

Students who took part in the study conducted by the researchers consistently overrated how interesting good looking people would be. In fact, the vast majority of the students said that there was no point in chatting to less attractive people at a party because chances are they’d have nothing to say.

However, after the students interviewed a sample of over 100 people, they realised that the opposite was actually true.

What do you think ladies? Are hot men likely to have a rubbish personality? Do you agree with this study?

popular
Bride asks for divorce day after wedding following groom's disrespectful cake stunt
Molly Mae shuts down backlash over her baby girl's name
Little girl spends 17 hours protecting her baby brother's head under earthquake rubble
Expert team end search for Nicola Bulley declaring she’s not in the water
Emma Pattison made distressed call to her sister before murder-suicide
Brother and sister abducted in March 2022 have been found alive
Natalie Imbruglia's Torn is actually a cover and the original just isn't the same
You may also like
3 weeks ago
Woman's gender reveal goes wrong after she forgets her partner is colour blind
3 weeks ago
WATCH: DSPCA reunites family with stolen dog after two years
3 weeks ago
Woman refuses to go to weddings and baby showers for rude people she doesn't hear from on a daily basis
3 weeks ago
Train passenger praised for 'refusing to give up' first-class seat to elderly lady
3 weeks ago
Men with flashy cars really could have 'small d**k energy', study confirms
3 weeks ago
Boss uses coffee test in every interview and won't employ those who fail
Next Page