They're small, they're round, and their tongues are always out and about.

A pug is a nice sight to see and an even nicer sight would be if you saw a pug running through your garden unaccompanied because that means there's no owner there to be like, 'hey get away from my pug, put him down, stop cuddling him, he's not yours.'

Turns out though that not all pugs that run through gardens unaccompanied are allowed to do so.

And some of them even get arrested and taken down to the station. 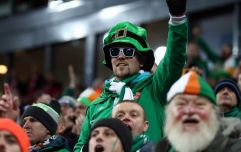 Copenhagen police say that the Ireland fans are welcome back anytime

END_OF_DOCUMENT_TOKEN_TO_BE_REPLACED

The pug in question, whose name is Bean, was caught sneaking around some gardens in New Jersey this week, so police decided to pick him up and bring him down to the station.

Bean was eventually picked up by his owners who were most likely very impressed that he managed to look so effortlessly flawless in his mugshot.

popular
Irish girls name was the most used Irish name in the United States last year
Ofcom receives 75 complaints over Jacques' treatment of Ekin-Su
Michael Owen hilariously responds to Love Island's heart rate challenge
Love Island: Danica sets her sights on Andrew as Luca asks Jacques about his relationship with Gemma
Prince William shouts at photographer who was "stalking" his family
Another of Gemma Owen's family could be headed for a reality show
Dublin Airport not ruling out a "flight cap" amid chaos
You may also like
19 hours ago
Irish man dies following hit-and-run in London
1 week ago
Police in UK start issuing fines to cat-callers
2 months ago
23 year old woman dies after eating suspected cannabis sweet
3 months ago
Missing one-year-old boy is found dead in septic tank at family’s home
3 months ago
Chris Watts still texting mistress before arrest for murdering his family
5 months ago
Alec Baldwin hands over phone in Rust movie shooting investigation
Next Page