The quick test to show whether someone is a good friend

It is very important to surround yourself with good, supportive people in order to be confident and happy.

We often hear about 'toxic' friendships and why it's important to banish them. However, sometimes it can be hard to see how the people around you really treat you.

END_OF_DOCUMENT_TOKEN_TO_BE_REPLACED

When researching for a book, behavioural scientist Jon Levy looked at how to make friends more easily and faster.

One of the tips he gave was actually a little test. While he advises doing this with strangers when getting to know them, we're just not sure it would be off the best first impression.

Instead, perhaps you could try it with friends you already have to see what they are really like.

Levy recommends trying a litmus test which is a quick overall test to measure quality. 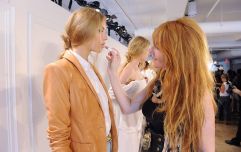 END_OF_DOCUMENT_TOKEN_TO_BE_REPLACED

He suggests that you start by asking “How much does the average employee steal from a cash register in a year?”

Apparently, the higher the number the more likely they are to be dishonest. The is because people assume others are like them, and will act as they would.

He next recommends asking the person to draw an E on their forehead to analyse how self-centred they are. If the E faces you, they focus on others, if it faces them, they’re probably more interested in themselves.

So like we said, the researcher recommends doing this with a stranger but if we were to walk across the room and ask someone we've never met about robbing from a till and drawing letters on their faces we doubt it would end in a beautiful friendship.

Maybe have a go with your current acquaintances as a social experiment, and remember that the answers are in no way definite and are meant to be taken more as suggestive.

popular
Vogue Williams slams man who refused to swap seats with her on plane
This is why the world is obsessing over Adidas Gazelles
Are we getting a mini heatwave in September?
Ryanair, easyJet and BA issue warning to anyone boarding with smart bag
Phoebe Bridgers and Paul Mescal go sale agreed on West Cork home
Greg O'Shea actually left Love Island to go to his granny's funeral
Gemma Owen spills the tea on how Luca gets on with Michael
You may also like
6 months ago
There's a candle that lets your husband know you want some of that 'dad bod'...
1 year ago
Ian Bailey has been chatting to the woman who married the ghost of a pirate
1 year ago
Siblings or Dating is the Instagram account that we're slowly becoming obsessed with
1 year ago
Short women and tall men make the happiest couples, study claims
2 years ago
What is gaslighting? And how do I know if it's happening to me?
2 years ago
Can #SocialDistance dating work? We asked a relationship expert for the lowdown on how singles can still make connections during the crisis
Next Page