These are the WORST Mother's Day gifts ever received

So every year we would get my mum a Turkish Delight for mother's day. I don't know how or why this tradition started but it was only about three years ago that she finally broke down and told us that she legit HATES Turkish Delight.

Now we have reason to believe that my dad actually manipulated the gifting system as he LOVED them and 'took care' of them when she secretly retched at the sight of them. 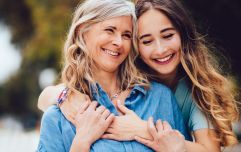 Happy Mother's Day! 10 meaningful ways to spend time with your mum this year

END_OF_DOCUMENT_TOKEN_TO_BE_REPLACED

Of course, anything you gave is precious - the pasta photo-frames, the highly descriptive pictures of mummy and the handprint heart shaped art.

But sometimes the gifts get a little on the... adventurous (and head-scratching) side.

One of our colleagues here at Her revealed that every year her and her sisters would get their mum deodorant and three golf balls. Er, ok.

Now, a survey of mums carried out by Aldi has revealed some of the worst mother's day gifts - and they include an inedible homemade cake, a carton of milk, a dustpan and brush and a photo frame with a photo that was taken out of one mum's home by her partner, wrapped and given back to her. Lovely. Oh, and an iron.

According to the questionaire, 70% of mums want to spend the day with their children, but 30% would prefer some alone time.

(I want those kids)

popular
Late Late Show viewers are not happy with Ryan's questions for Billy Connolly
10 items from Zara for the perfect autumn capsule wardrobe
Former detective chief says Brian Laundrie discovery is "strange"
WATCH: Parents see person walk past daughter's crib in creepy baby monitor footage
At least seven bodies have been found in search for Brian Laundrie
Paris Hilton says she was "slapped" and "strangled" as a teen in youth care
You can be in the audience of an iconic US game show filming in Dublin next month
You may also like
7 months ago
George, Charlotte and Louis make Mother's Day cards for Granny Diana and reveal "papa misses you"
7 months ago
M&S are selling 'Mumosa' for Mother's Day and we'll take the lot, thanks
7 months ago
5 fabulous gifts for Mother's Day that are a little bit different
7 months ago
Mother's Day: 15 fab presents any mum will be delighted to receive
1 year ago
Tissues, receipts, and rosary beads: a handbag only an Irish Mammy could love
1 year ago
My mum has compromised immunity so I can't visit her this Mother's Day
Next Page