A great day for those particular parishes with Valentine's Day just around the corner.

If you're from Athlone, Waterford or Tralee, we know exactly what you're thinking. How in the name of Jesus did the people at Picodi.com reach the conclusion that you're seemingly surrounded by Casanovas?

After checking the statistics of romantic queries on the Internet, they've compiled a list of the most romantic locations in Ireland and those towns in Westmeath, Waterford and Kerry have come out on top. 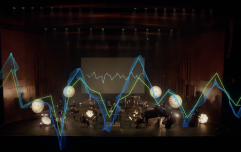 Fitbit composed a symphony based on data around the stress of 2020 and it's so fascinating!

END_OF_DOCUMENT_TOKEN_TO_BE_REPLACED

Basically, the list was created by examining the frequency of words and queries that were searched for on Google. Searches for things like 'Valentine’s Day,' 'flowers,' love' and others terms that you would associate with Valentine’s Day were studied.

During the period before Valentine’s Day, the frequency of searches for these queries increases around Ireland.

After looking at Google's search term results, it was discovered that the most romantic Irish people live in Athlone, Waterford, and Tralee.

Granted, it might seem a bit frivolous - I mean, anyone can Google flowers, but buying them is a different thing! - but we're sure the people of these areas aren't complaining with their new status and will use it to their benefit if they can.

The research was based on a comparison of the increase in popularity of various keywords during the period of January-February 2019, according to Google archived data (via the Keyword Planner tool).

The 22 locations considered in the research were chosen by the size of the population (more than 20,000 residents).

As for the lowest interest in all things Valentine’s Day of those 22 locations, residents of Swords, Dublin placed in last, while the people of Ennis and Bray didn't fare too well either.

You can see the list of the most romantic towns and cities in Ireland from top to bottom below. 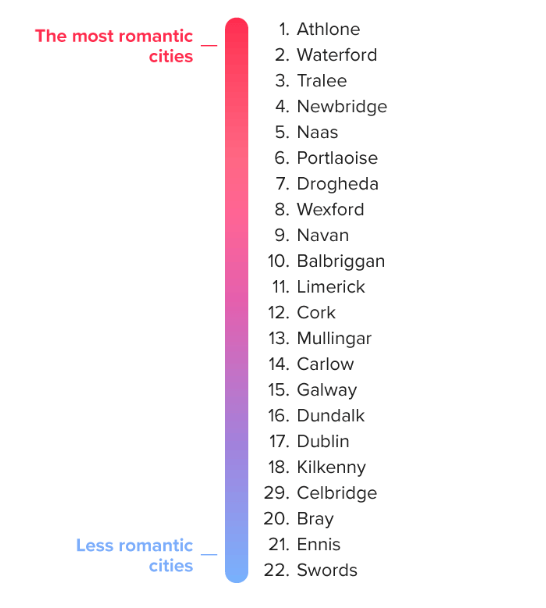 Girls With Goals || Her · Ep.156: 'Beauty Returns' - Rebecca O'Keeffe is BACK and we're talking about viral beauty trends
popular
Hilaria and Alec Baldwin welcome baby No.6 - five months after baby No.5
Palace source says THIS incident on the tour of Australia upset Meghan's staff
Someone has ranked the penis size of men from all over the world
Here's what happens on every day of your menstrual cycle (roughly)
Here's how long sperm actually lasts for after sex
Here's the average age people lose their virginity around the world
Meghan Markle's former colleague says she's 'not a person you can be friends with'
You may also like
2 weeks ago
British ex-pats booking short stays in Ireland to get around Covid travel bans
3 weeks ago
Majority of passengers coming through Dublin airport in January were non-essential travel
1 month ago
Central Bank to become the new headquarters for Pokemon
2 months ago
Here's all the best movies on TV this Christmas Eve
2 months ago
"The Irish like nothing more than complaining about depictions of themselves" - Jon Hamm on Wild Mountain Thyme controversy
4 months ago
7 gazebos from €40 to €12,000 for your outdoors entertaining
Next Page