A schoolgirl's touching poem about being dyslexic is going viral.

In it, the writer speaks about how she will never succeed - but reading the lines in reverse, its message is quite different.

"I am stupid/ Nobody would ever say/ I have a talent for words.

"Nobody could ever convince me to think that/ I can make it in life." 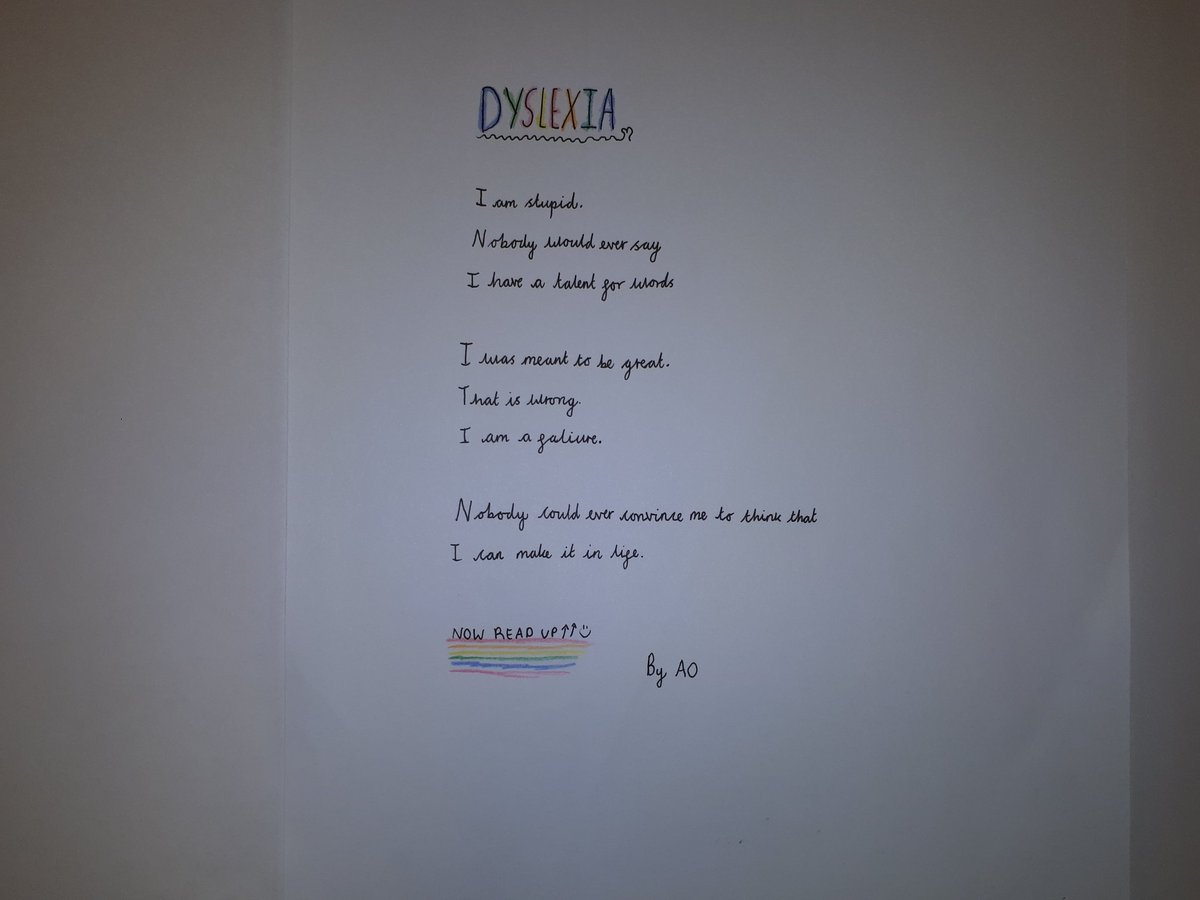 The poem was written by a ten-year-old pupil at a school in Hertfordshire in the UK.

Teacher Jane Broadis shared it on Twitter this week, saying it had "stunned" her.

Today in Y6 we looked at poems that could be read forwards & backwards. I was stunned by this one written by one of my 10 year olds. Please share - I would love her work to be appreciated further afield. I wonder if it could even find a publisher? pic.twitter.com/tmEQpiRrhq

END_OF_DOCUMENT_TOKEN_TO_BE_REPLACED

Jane had been teaching her class about poems that could be read backwards as well as forwards.

"I was absolutely stunned when this tiny and humble 10-year-old showed me the poem," she told Pretty52.

"I can't believe she wrote something so beautiful and powerful in such a short space of time - she wrote it during her one and-a-quarter hour lunch break."

It has struck a particular chord with others who suffer with dyslexia.

I am dyslexic, I learn differently, I find some of the things my brain comes up with hilarious. This young students poem is wonderful. Well done. Dyslexia doesn’t stop you doing anything. You just have to find a way around the obsticle. Side step it.

Thanks. My second grade teacher threw a paper in my face and asked if I was stupid. My parents got me dyslexia training through the Shriners. Result: 2 college degrees and a 40 year career as a journalist/writer.

Thank u for sharing my D’ter is dyslexic and it took me months and months to get anyone to acknowledge there was a problem. I wish she had u as a teacher

popular
Bride asks for divorce day after wedding following groom's disrespectful cake stunt
The Greatest Showman is becoming a Broadway musical and we need a second
These are the most popular names for babies born in February
Gwen Stefani reportedly pregnant with baby number four
Natalie Imbruglia's Torn is actually a cover and the original just isn't the same
Police believe they know what happened to missing dog walker Nicola Bulley
Here Are The Top 20 Most Common Pin Codes in The World
You may also like
4 months ago
"Home alone" – Prince Louis memes are taking over the internet
5 months ago
Andrew Tate has – finally – been banned from Facebook and Instagram
6 months ago
Sonya Lennon reveals ‘judgement’ her daughter, 17, experienced when buying pregnancy test
7 months ago
Here's how to make Hailey Bieber's TikTok famous Strawberry Glaze Skin Smoothie
7 months ago
Mass in Mayo church goes viral after spooky incident happens over livestream
7 months ago
People on TikTok are making 'healthy Coke' with just two ingredients
Next Page