A young boy from Texas has won an award for his outstanding charity work where he helped to save more than one thousand dogs.

Because of his dedication to protecting vulnerable animals, Roman was recently named Kid of the Year by the ASPCA.

Although Roman is just seven years old he has been helping to rescue dogs for several years, starting when he was only four years old.

Roman's family set up a foundation in 2016 to help dogs and cats at risk of being euthanised and the boy has been at the forefront of the charity every step of the way.

"Established in December of 2016, Project Freedom Ride is connecting unwanted, abandoned dogs (and a few cats) who may otherwise be bound for euthanasia in Texas with Families, Rescues and Humane Societies in the Pacific Northwest. My name is Jen and I am the founder of PFR".

He described his son as "the face many of you will associate with PFR." 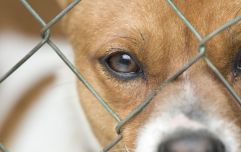 END_OF_DOCUMENT_TOKEN_TO_BE_REPLACED

Christmas is one of those times of the year when many people will consider adopting or buying a pet dog for themselves or a family member.

Unfortunately, many of these dogs will be left at animal shelters or abandoned outdoors in the New Year, putting additional pressure on the already limited services that animal charities can provide.

Thanks to wonderful families like Roman's, forgotten dogs in Texas can begin again in a nurturing environment.

popular
Rupert Young, twin brother of Will Young, passes away, aged 41
The second season of Dirty John lands on Netflix next week and we’re already hooked
WATCH: Paul Mescal stars in new Rolling Stones' music video 'Scarlet'
Staycation: TripAdvisor reveals the top 10 hotels in Ireland for 2020
Someone has ranked the penis size of men from all over the world
Daisy Coleman from Netflix's Audrie & Daisy has died, aged 23
Kate Middleton has addressed the rumours that she's pregnant with her fourth child
You may also like
1 month ago
Peter Mark charging some customers €60 extra for using at-home dyes and regrowth
1 month ago
We need to rethink the ways we treat survivors of abuse
1 month ago
Pride memories from Davina Devine: "I've probably done about twenty Pride parades"
1 month ago
85 percent of women have increased care responsibilities since #Covid-19
1 month ago
What is gaslighting? And how do I know if it's happening to me?
1 month ago
Three in 10 female students experienced 'incidents that correspond to rape' in college
Next Page