Sony Music has spoken out about the ongoing battle between singer Kesha and music producer Dr Luke.

Last week, a judge ruled that Kesha could not break her contract with the music producer because it had been heavily negotiated and it wouldn't be commercially reasonable.

Kesha alleges that Dr. Luke, whose real name is Lukas Gottwald, raped her 10 years ago after using a pill to 'knock her out'. 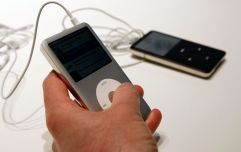 Did you hang onto your old iPod? It could be worth a tidy sum of cash

END_OF_DOCUMENT_TOKEN_TO_BE_REPLACED

Dr Luke meanwhile claims that Kesha's allegations are "“outright lies that have been advanced to extort a contract renegotiation and money”.

Yesterday, the music label released a statement to The New York Times on the issue:  “Sony has made it possible for Kesha to record without any connection, involvement or interaction with Luke whatsoever, but Sony is not in a position to terminate the contractual relationship between Luke and Kesha".

“Sony is doing everything it can to support the artist in these circumstances, but is legally unable to terminate the contract to which it is not a party".

popular
Here is the reported I'm A Celeb All Stars line-up
Two Love Island 2022 stars have just become step siblings...
Molly Mae Hague shares emotional moment she discovered she was pregnant
Abducted in Plain Sight: True crime drama follows girl who was kidnapped twice by the same man
Female child rushed to hospital after violent incident in Co. Clare
Here's when Florence Pugh's new Irish film lands on Netflix
Why Are Men so Obsessed With Boobs? The Answer is Pretty Surprising...
You may also like
1 year ago
Garth Brooks reportedly planning a series of Croke Park concerts
4 years ago
This singer auditioned to record a song for this year's John Lewis Christmas ad
4 years ago
Ed Sheeran says he will quit music to raise a family with his fiancée
4 years ago
Former Pussycat Doll claims the band was a front for a prostitution ring
5 years ago
Move over Drake! This is now the most streamed song on Spotify
5 years ago
Jay-Z had the sweetest thing to say about Chris Martin in an interview
Next Page