The employee became concerned for the girl's safety after she was approached by a stranger.

A Starbucks worker has been praised for the innovative way they rushed to help a young girl in an uncomfortable situation.

Brandy Roberson, the mother of the teenage girl, took to Facebook to share the story, revealing that her daughter had been sitting alone in a Texas Starbucks when a man approached her.

END_OF_DOCUMENT_TOKEN_TO_BE_REPLACED

Once the barista noticed the girl was visibly uncomfortable, they brought another coffee cup to the table, telling her it was “an extra hot chocolate someone forgot to pick up".

However, the cup had a hand-written message on the side that read: "Are you okay? Do you want us to intervene? If you do, take the lid off the cup." 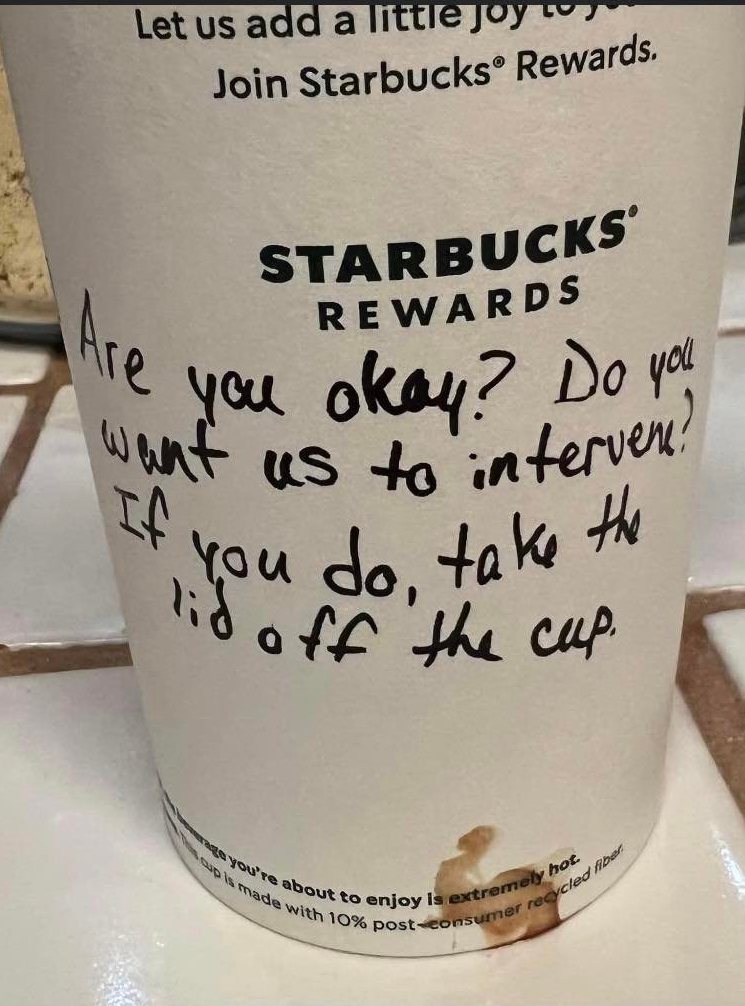 Brandy later told Today that her daughter been studying in Starbucks when the man began to talk to her.

END_OF_DOCUMENT_TOKEN_TO_BE_REPLACED

He continued to linger for a while and was talking “fairly loudly.”

“It sounded like he was quite animated. I believe this is what alerted the employees. He had also not come in with my daughter, so they knew she probably did not know him."

While the girl did not remove the lid, she said knowing the whole team was watching over her during her time there made her feel safe.

Eventually, the man became aware that she was communicating with the staff and left.

END_OF_DOCUMENT_TOKEN_TO_BE_REPLACED

The teenager told her mother what had happened as soon as she got home and said the gesture had really warmed her heart.

"It made me feel so grateful that the Starbucks employees were watching out for her," Brandy said. "As a mom, that is my worst fear that something would happen to my child and nobody would be there to help."

"The best of humanity right there!" another added.

popular
Love Island fans have some things to say about Shaq and Tanya's confession
Natalie Imbruglia's Torn is actually a cover and the original just isn't the same
Wayne Lineker called out for comment on Tommy and Molly-Mae's baby news
Man charged with the murder of pregnant Natalie McNally
Priscilla Presley pays tribute to daughter Lisa Marie on her 55th birthday
Chris Hughes reveals he has been rushed to hospital in "worst" night of his life
Dani Dyer reveals the gender of her twin babies
You may also like
4 months ago
"Home alone" – Prince Louis memes are taking over the internet
5 months ago
Andrew Tate has – finally – been banned from Facebook and Instagram
6 months ago
Sonya Lennon reveals ‘judgement’ her daughter, 17, experienced when buying pregnancy test
6 months ago
Here's how to make Hailey Bieber's TikTok famous Strawberry Glaze Skin Smoothie
7 months ago
Mass in Mayo church goes viral after spooky incident happens over livestream
7 months ago
People on TikTok are making 'healthy Coke' with just two ingredients
Next Page