At this stage, most people have heard of the iconic mural of Stormzy located in Smithfield, Dublin. A mural so vivid, colourful and detailed, that it grabbed the attention of the man himself, the UK rapper, who went to visit it.

And if you have never seen it before now, I would recommend going to see this masterpiece soon as Subset, the creators behind this wall art have received a notice from Dublin City Council asking them to remove the mural due to it being an "unauthorised development" that did not receive planning permission.

Subset has since began painting over half of their Stormzy mural plus half of their Rathmines mural, which too has been requested for removal by the council. 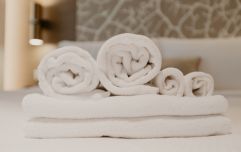 END_OF_DOCUMENT_TOKEN_TO_BE_REPLACED

People were appalled to see these vivid street art masterpieces being removed with one person saying: "Such a shame stunning work taken down for no good reason. Why is it so important to suck the life and colour out of an area that would celebrate such things."

While another wrote: "Ridiculous. They’re supposed to get behind street art, their programme is called Colour in the City."

Subset, who too seem very upset by this news has taken to a new location within the city centre to create a piece in response to the Council that reflects both their sadness and wishes for the future of Dublin. They created a piece in grey (reflecting the lack of colour the city will have if all their murals are removed) alongside the caption "Make Dublin great again" representing their hopes and wishes to continue injecting colour and life onto the grey streets in Dublin.

“When you build a wall, it’s gotta be grey.” #dublincity #culture #itsgonnabehuge

Their murals which can be seen throughout Dublin add an "unbeatable joy" to the city, one fan commented, while another added that removing them would be "a bigger crime."

popular
Power ponytails and perfect messy buns! Here's some TikTok hair hacks to try at home
Irish influencer Lisa Jordan reveals her little boy's name and it's so cute
Ed Sheeran is reportedly expecting a baby with wife Cherry Seaborn
Our Girl is axed after talks for Jacqueline Jossa to replace Michelle Keegan are shelved
This 'Mississippi Mud Pie' recipe is a must-try for chocolate cake fans
Here's what happens on every day of your menstrual cycle (roughly)
Jennifer Aniston has made a statement about her relationship with Brad Pitt
You may also like
1 month ago
Love to travel but hate to plan? This Irish experience planner will sort out your entire itinerary
1 month ago
'Extremely isolating': LGBTQ+ homeless community faces more challenges
1 month ago
We need to rethink the ways we treat survivors of abuse
1 month ago
85 percent of women have increased care responsibilities since #Covid-19
1 month ago
What is gaslighting? And how do I know if it's happening to me?
1 month ago
'Guilt can only take you so far': Yomi Adegoke on performative activism and #BlackLivesMatter
Next Page