These are apparently the most friendly countries in the world

Ireland doesn't do quite as well as you'd expect.

InterNations complied an Expat Index, asking those who have moved and are now living abroad, to rank the countries that they live in now in a vast number of different ways.

One of those rankings involve rating a country's friendliness, and the ease at which you might make new friends there. 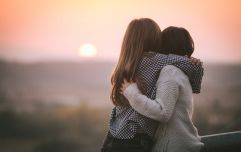 END_OF_DOCUMENT_TOKEN_TO_BE_REPLACED

Things we've learned from the results: Portugal is crazy friendly, as are most of Central and South America. A lot of central Europe, and particularly Scandinavia, appear to be one big cold shoulder to newbies in the area.

Also, while Ireland prides itself on being one of the most welcoming and friendly countries in the world, turns out the people who moved here disagree with that self-assessment.

Ireland came 23rd in the friendliness index, while the United Kingdom ranked 14th in the LEAST friendly.

Meanwhile, in the Making Friends ranking, Ireland again missed out in the top ten (and the top twenty), landing in 27th, and the UK came in 17th for MOST difficult in making friends in.

popular
How to turn 20 days of annual leave into 50 days off
Man arrested after woman raped on train as passengers filmed it
Richard Madeley under fire for comments about Kate Middleton's waist
70-year-old woman reportedly becomes first-time mum after welcoming baby boy
WATCH: The first trailer for Ozark Season 4 just dropped
Someone has ranked the penis size of men from all over the world
Police launch investigation after woman "spiked with needle" in UK nightclub
You may also like
2 weeks ago
Friends fans convinced they've figured out who Phoebe's 'imaginary' roommate really is
1 month ago
Jennifer Aniston responds to David Schwimmer romance rumours
1 month ago
QUIZ: Can you beat Ross's quiz in Friends?
2 months ago
Jennifer Aniston and David Schwimmer are apparently dating in real life
2 months ago
Jennifer Anniston perfectly explains why she cut ties with anti-vaxxers
2 months ago
Jennifer Aniston cuts ties with all the anti-vaxxers in her life
Next Page