The phases of every relationship can usually be analysed and dissected by a couple's sexy times.

If you're having sex with virtually all your clothes on, for example, then it's most likely because you either just met and can't wait the few seconds undressing would take or else you've been together for waaaay too long and taking off the clothes is just too much effort.

END_OF_DOCUMENT_TOKEN_TO_BE_REPLACED

Upright sex is literally the most eager of all the positions. If you are standing up during sex, then you are really into it. It screams, "we can't even wait to find somewhere to lie down right now..."

In movies, people are always doing the stand-up thing but they never seem to grapple with the kinds of balance issues we have, never mind height discrepancies. What a palaver.

Stage 2: Penis Pokey (1-3 weeks – hopefully no longer than this)

The first few times can be a bit hit and miss. How many holes do they think are actually down there? 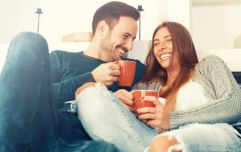 The one thing that couples should do together every day

END_OF_DOCUMENT_TOKEN_TO_BE_REPLACED

BCG is one of those fancy ones you do early on when every sexual encounter is like a saucy acrobatics show, a sexy cirque du soleil, just don't for God's sake lean forward as they could sustain an injury and may never trust you again.

You're still in the matching underwear stage of the relationship and pretending that you don't fall asleep eating garlic cheese chips in bed after a night out. Cling to this phase for as long as possible.

Okay, we can never quite tell if they're just chancing their arm or whether it was a genuine mistake (see Penis Pokey). Either way STOP NOW.

Your enthusiasm for doing stuff is waning somewhat. DS still gives the impression that you're into it but requires less acting on your part (unless there's a mirror in the vicinity).

This is the stage when every couple hits a sexual plateau. You may find yourselves vetoing sex if something good is coming on TV or else scheduling sex around events like book club, dinner dates with other couples and trips to Ikea. Do NOT give in (see stage 8).

Everyone gets a notion now and again that they need to inject a bit more life into the sexcapades. For us, it's usually buying some elaborate and hard to operate underwear. For them, unfortunately, it's usually a 'sexy' dance that we will never be able to unsee.

Missionary is the quintessential 'boring couple' position but the main thing is you're still at it (see stage 10).

Stage 9a: Side Missionary Position

This one's the same as missionary position only everyone gets to lie down. Not lie down in a saucy way but more in a 'given up the will to try any more' kinda way. Basically, you're just thrashing around like a couple of eels scissoring. It's not great, but at least no one's getting knee chaff.

If you are spooning fully clothed then the likelihood is that you are married by now and may even have produced a child thus making the chances of ever having sex again seem pretty slim.

popular
Parent's Benefit Leave in Ireland is being extended from today - here's what you need to know
Drama series about Maxine Carr and Ian Huntley is filming in Dublin
Love Island's Gemma finally tells villa about dad Michael Owen on TV
Saoírse Ruane's mum shares her daughter's anxiety over doctor visits
Love Island: Danica sets her sights on Andrew as Luca asks Jacques about his relationship with Gemma
10 stunning and affordable outfits that are perfect for a summer wedding
Irish girls name was the most used Irish name in the United States last year
You may also like
3 years ago
The three questions you should ask before ending a relationship
3 years ago
Apparently, living together before marriage can have THIS side effect
3 years ago
Research suggests this physical trait makes for a better relationship
3 years ago
Science says this is how many dates you have to go on before you find 'The One'
3 years ago
The age you get married could affect whether you divorce or not
3 years ago
Apparently, this is the most ideal age gap in a romantic relationship
Next Page