What was that shite you were talking the other day about being too old for stuff?

If you're one of those gals who moans about their age when the aches and pains set in after a tough workout, then Ernestine Shepherd will make you eat your words.

She holds the title of the world's oldest female bodybuilder in the Guinness Book of World Records.

END_OF_DOCUMENT_TOKEN_TO_BE_REPLACED

Hell, the Baltimore gym freak didn't even start workout out until the grand old age of 56.

But as she marks the milestone anniversary and joins the octogenarian club, she is still in absolutely incredible shape.

Her amazing transformation into the world's fittest gran started more than 30 years ago when she noticed she'd put on some weight as a middle-aged woman, ABC News reported.

She started pretty basic, just doing an aerobics class with her sister and then just built up her training volume slowly.

Now she can bench press 150lbs and has heavy squats in her weights programme with her personal trainer.

According to the Guinness Book of World Records, she gets up at 3am every day and runs a total of 80 miles every week. 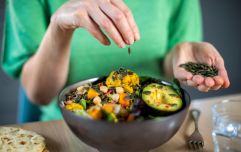 END_OF_DOCUMENT_TOKEN_TO_BE_REPLACED

Her diet is sparse but pretty healthy. Her trainer devised a 1,700-calorie diet that consists of several small meals a day made up of boiled egg whites, chicken, vegetables, and plenty of water.

She a shining example to every one of us...

popular
You can now apply for tickets to the Late, Late Toy Show
Irish TikTokers are telling their dads they paid €50 for 'premium air' in their tyres
Forget Making a Murderer, This Crime Documentary is Finally on Netflix
Simon Harris gives three urgent options for easing restrictions next week
Khloe Kardashian has JUST confirmed she is pregnant
Not going anywhere: Baby names set to stay popular for the next decade
Here's what happens on every day of your menstrual cycle (roughly)
You may also like
9 months ago
The Body Coach Joe Wicks' PE classes are back for lockdown
1 year ago
Intermittent fasting is not good for weight loss, study says
1 year ago
Bodybuilder explains why you don't need to "eat clean" to lose weight
1 year ago
Personal trainer explains why waist trainers and ab belts don't work
1 year ago
Officer worker? Here's 5 things you can do to keep fit and healthy
1 year ago
4 protein-rich foods if you're changing up your diet this January
Next Page