A couple of weeks ago, #EqualPayDay was trending to mark the point in the year that women stop earning the same as their male counterparts.

While we have a long way to go before equality in the workforce is realised, it's sad to see that sexism is also very much apparent.

Canadian web company, Vestra Inet reportedly posted a job description to LinkedIn and it received a very negative reaction on Twitter because of its sexist nature. 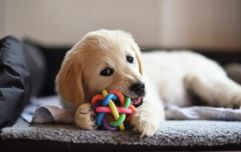 Company hiring someone to play with puppies all day in UK

END_OF_DOCUMENT_TOKEN_TO_BE_REPLACED

The advert for "an online writer and SEO specialist" stated that because the position includes receptionist duties, "female candidates are preferred".

The post now appears to have been removed but not before people took to Twitter to make their feelings known.

Vestra Inet has not yet commented on the matter.

This is an actual job posting for #VestraInet. This is why we need feminism. https://t.co/jh6UbzXPH4 pic.twitter.com/2QqP5VP2oc

Excuse me @vestranet what on earth does being a woman have to do with someone's ability to be a receptionist?! https://t.co/EErIOJsXMb

GUYS we did it! We traveled back in time to 1950! Oh... wait, no, that's just a sexist job desc. @Vestra_Inet pic.twitter.com/SBXQzvprMv

popular
Simon Harris gives three urgent options for easing restrictions next week
Personality QUIZ: Which character from You are you?
Another Strictly star has pulled out of the live show
This TikTok hack shows you how to pack more despite baggage allowance
Addison Rae temporarily banned from TikTok
Tributes paid to Limerick based blogger and model Patrick McLoughney
Lidl closing early this weekend to thank staff for hard work
You may also like
2 months ago
Spanish town offering free houses and jobs to entice people to move there
3 months ago
Japan becomes the latest country to introduce plans for a four-day work week
6 months ago
Winery offering $10,000 a month to drink wine and live rent free in California
1 year ago
A very large amount of us think we'll end up making more money than our parents
1 year ago
Job hunting? This could be the key to creating the perfect CV
1 year ago
Fancy getting paid €35,000 a year to care for two gorgeous dogs?
Next Page