It's the stuff teen movies are made of...

Mean Girls is all too real for some, like Lillian Skinner, who was tricked into believing se had been nominated for the homecoming court in her high school. Lillian took it on the chin but her friends Anahi Alvarez and Naomi Martinez were less than impressed.

Both Anahi and Naomi were indeed nominated for homecoming queen at Grand Prairie High School, and so they made a pact that if either one of them won, she would give up the crown to their pal. 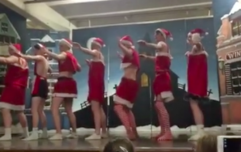 END_OF_DOCUMENT_TOKEN_TO_BE_REPLACED

Speaking to NBC, Martinez described Skinner as "one of the nicest people I’ve ever met", while Alvarez said "We need people in this world like Lilly."

The pair clued the school principal in on their plan, so when Alvarez won the title, the announcement was quickly followed by a second one asking: “Lillian Skinner, please step up and receive this honour!” At the time, Lillian was on hand to take pictures for the school paper.

The thrilled 17-year old said of her chance to wear the crown: "It’s like a dream or something!”

Alvarez said: "Lilly won. I just ran in her place, in her position.”

popular
Irish girls name was the most used Irish name in the United States last year
Ofcom receives 75 complaints over Jacques' treatment of Ekin-Su
Michael Owen hilariously responds to Love Island's heart rate challenge
Love Island: Danica sets her sights on Andrew as Luca asks Jacques about his relationship with Gemma
Prince William shouts at photographer who was "stalking" his family
Dublin Airport not ruling out a "flight cap" amid chaos
Victoria Beckham recalls moment she was weighed on live TV
You may also like
1 month ago
WATCH: Deleted Mean Girls clip shows Cady and Regina face off at prom
3 months ago
Mean Girls actor Jonathan Bennett marries long-term boyfriend
11 months ago
Mean Girls Broadway stars announce engagement
1 year ago
QUIZ: How well can you remember Mean Girls?
2 years ago
A Mean Girls bottomless brunch is happening in Dublin's Jam Park soon
2 years ago
There's a Mean Girls-themed pop up restaurant opening and it sounds SO fetch
Next Page