A lot of people were not impressed.

You never know how you're going to react during the big moments in your life, but sometimes it's not always a great thing.

A video from four years ago has resurfaced on TikTok, and a lot of people aren't happy about what's going on in the viral clip.

END_OF_DOCUMENT_TOKEN_TO_BE_REPLACED

The video that was shared by Taylor Loren showed her now husband at their wedding pulling out his phone and checking it as he's standing at the alter.

Captioning the clip "Husband of the year," Taylor said: "4 years ago today I walked down the aisle to marry the love of my life. It was one of the most important & emotional moments of our life and my husband did the most romantic thing…"

You can see the the groom looking down the aisle and smiling, assuming this is when he sees his bride.

That's when the video cuts to the part when he pulls out his phone, which Taylor added: "He checked his freaking phone."

@taylortokshusband of the year ? (yes I walked down the aisle to Kanye, RIP KIMYE) ##weddingtiktok ##marriage♬ original sound - taylor loren

The video has hit 2.3 million views since she uploaded it, and many people are less than impressed by his actions. END_OF_DOCUMENT_TOKEN_TO_BE_REPLACED

Viewers were outraged by his behaviour, some saying that she should divorce him and others saying it was "tacky" and "suspicious".

But amidst the outrage some felt, there was a lot of people standing up for the groom, claiming there could be a number of reasons that would make him do this.

One user said: "Vows are probably on his phone. Chill."

Another said: "I do that when I'm nervous. I always pull my phone out."

A third said: "You can tell he is nervous. It's a big moment." 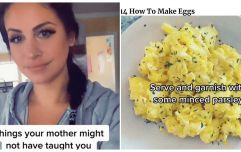 END_OF_DOCUMENT_TOKEN_TO_BE_REPLACED

Some pointed out that even if his vows were on his phone, he should've put them on paper instead. Another joked that everyone he knows is at the wedding and questioned who would be texting him.

Regardless, the couple are still happily married to this day, with Taylor even making a part two to allow her husband to defend himself.

popular
Top 9 moments from the Toy Show we're still talking about
The internet is saying the same thing after Ryan's Toy Show opening
The Toy Show DJ brothers have been offered their very first gig
Vicky Phelan reveals how she's keeping up with her family Christmas traditions post treatment
Four teenage boys arrested on suspicion of murdering 12-year-old girl in UK
Viewers in bits after Barry Humphries congratulates Dermot O'Leary on coming out
We finally know what happened to Sam in And Just Like That
You may also like
2 weeks ago
Woman 'rolls down mountain', leaves hilarious review about her 5-star leggings
2 weeks ago
Who started the 'plant one tree for every pet picture' trend on Instagram?
3 weeks ago
Outrage after man criticises wife for bleeding after birth
1 month ago
Cinnamon rolls baked in a waffle maker might just be our favourite new food trend
1 month ago
WATCH: Parents see person walk past daughter's crib in creepy baby monitor footage
1 month ago
TikTokers are using lube as primer in the latest viral beauty hack
Next Page