DIY pasta is the new homemade bread, according to new online search data

Banana bread is passé and rye is officially out. Now it's all about pasta.

Searches for pasta and noodles recipes from around the world have skyrocketed, according to the latest data from Pinterest.

The social network has reported that searches for 'homemade fettucini noodles' are up 471 per cent this month, while those for 'Polynesian Ohana noodles' have risen by 394 per cent.

Amateur chefs have also been scouring Pinterest for recipes for 'beef ramen noodles' (searches are up by 320 per cent) and 'noodle kugel' (up 284 per cent). 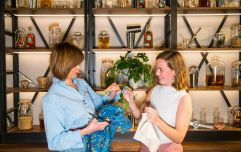 Need inspo for Christmas catch-ups? You can drink as you craft at this Dublin distillery

END_OF_DOCUMENT_TOKEN_TO_BE_REPLACED

If you've been itching to give your gaff a new look, you're not alone. We've all gotten very into DIYs inside and outside the house, the social media site has reported.

Searches for 'collage wall prints' are up 705 per cent in the last four weeks, according to Pinterest, and those for 'garden wall art' are up 360 per cent.

But more than ever, DIYers are looking to save money as they spruce up their homes.

Searches for 'DIY small patio ideas on a budget’ have risen by 658 per cent and those for ‘budget garden inspiration ideas’ are up 528 per cent.

Girls With Goals || Her · Ep.151: 'A Story Shared' - Aoife P. Rafter on blogging during a pandemic and living with CF
popular
I'm A Celeb end date confirmed as series wraps up early
Roz Purcell apologises for error with new clothing line amid sizing criticism
Rosanna Davison brings her twin boys home to meet their big sister
Irish sustainable clothing company remove all stock from website for Black Friday
Prince Harry 'supported by William and Charles' after wife Meghan's miscarriage
This ingenious hack to clean your washing machine is an absolute game changer
Here's how to apply to be in The Late Late Toy Show's virtual audience
You may also like
3 months ago
Green hair and ripped bikini lines! We have only ourselves to blame for these lockdown beauty disasters
4 months ago
Hotel feels at home: 5 easy ways to make your bedroom the ultimate staycation
7 months ago
Everything you need to know about doing a gel mani at home
10 months ago
DIY guru the Gaff Goddess has added a second Dublin event!
10 months ago
Want to actually 'do it yourself' when it comes to DIY? The Gaff Goddess is holding a Dublin event to answer all of your questions
1 year ago
The super simple paint trick that will make a small, dark room look much brighter
Next Page