Ed, have you seen this?

Earlier this month Ed Sheeran announced that he has written a song about Galway, aptly named Galway Girl.

If that didn't excite people enough, he also mentioned that he'd be filming the video there too. However, what perhaps got people most excited was when Ed mentioned that he would be looking for 'proper ceili dancers' to star in the video. 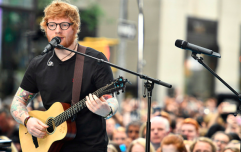 You can get an Ed Sheeran cocktail in this Galway pub

END_OF_DOCUMENT_TOKEN_TO_BE_REPLACED

This obviously set the Irish dancing world alight, considering what an opportunity it would be for this type of dance to feature in a pop music video.

With this, plenty of dance schools around the country have been practicing their best steps along to Ed's biggest hits. Last week we saw Fusion Fighters put together to showcase their talent and now a group of Galway Girls have done the same.

Eight dancers from the Hession School of Irish Dance put together a routine for one of Ed's latest hits Shape of You.

The girls dance on the Claddagh in the heart of Galway. They begin by dancing in perfect time to Shape or You and gradually transition into A Lovely Madness by Beoga, a band who are also featuring on Ed's upcoming song.

Ed needn't bother putting a video together for his new song Galway Girl, he can just use this one.

popular
Late Late Show viewers are not happy with Ryan's questions for Billy Connolly
10 items from Zara for the perfect autumn capsule wardrobe
Friends actor James Michael Tyler has died, aged 59
Apparantly, there is one colour you should never wear at a job interview
The viral photo that can help women detect early signs of breast cancer
15 brilliant stocking fillers we are picking up from Penneys before they sell out
5 fabulous things to do in Ireland tomorrow for the Bank Holiday Monday
You may also like
1 month ago
Ed Sheeran announces concert at Croke Park
1 month ago
Ed Sheeran announces shows in Belfast, Limerick and Cork
3 months ago
Ed Sheeran reveals that he began Courteney Cox and Johnny McDaid's romance
1 year ago
Ed Sheeran is reportedly expecting a baby with wife Cherry Seaborn
1 year ago
Ed Sheeran donates £1 million to local charities amid #Covid-19 pandemic
1 year ago
Ed Sheeran is taking another break from music
Next Page